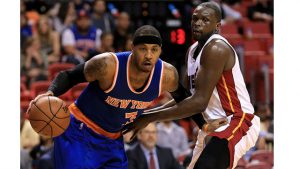 MIAMI — It’s been a long time since the New York Knicks were in this position.

More than three years, to be precise.

Carmelo Anthony matched a season high with 35 points, and the Knicks took advantage of second chances all night to beat the injury-ravaged Miami Heat 114-103 on Tuesday night. At 12-9, New York is three games over .500 for the first time since the end of the 2012-13 season.

Kristaps Porzingis had 14 points and 12 rebounds for New York, which has won four straight. The Knicks lost Derrick Rose to back spasms in the third quarter, but still scored 61 points after halftime.

Goran Dragic scored 29 points and Hassan Whiteside finished with 23 points and 14 rebounds for the Heat, who fell to 2-8 at home. New York had a 31-13 edge in second-chance points, and outscored Miami 56-36 in the paint.

The teams were tied at 68 late in the third quarter, when the Knicks went on a 27-13 run over the next eight minutes to take control. Anthony finished 13 for 27 from the field, and Porzingis and Joakim Noah combined for 22 rebounds.

The Heat had nine players, and might not have any more than that until next week. Justise Winslow missed his 12th consecutive game with a sore left wrist, and James Johnson (right rotator cuff), Dion Waiters (groin), Luke Babbitt (right hip) and Josh Richardson (right ankle) were also sidelined.

None are slated to travel for Miami’s three-game, four-day stretch that starts Wednesday in Atlanta. The Heat are leaving some staff in Miami to work with the injured players.

“They’re getting way more work in than they would get on the road,” Heat coach Erik Spoelstra said.

Knicks: Coach Jeff Hornacek is now 1-5 against Miami. He’s beaten every team he’s faced, and has yet to coach against his former Phoenix club. … The Knicks missed their first 11 3-point tries, then made 7 of their last 14. … New York is over .500 this late in a season for the third time in 12 years. … Not a good sign for Wednesday, when Cleveland visits the Knicks: New York is 0-4 on the second night of back-to-backs this season.

Heat: It was Dragic’s highest-scoring total as a member of the Heat. … Whiteside has led the Heat in rebounds in all 21 games this season. … Miami struggled again from the line, shooting 16 for 27.

Spoelstra was asked to respond to Knicks President Phil Jackson’s comments last month about the way the Heat had to handle LeBron James when he played in Miami. Spoelstra laughed it off. “I honestly just think he gets bored and likes to throw stuff out there to get everybody all fired up,” Spoelstra said. James and the Cavaliers visit Madison Square Garden on Wednesday.

Hilarity briefly ensued in the second quarter when the 7-foot-3 Porzingis had a jump ball against Miami’s Tyler Johnson, who might be generously listed at 6-foot-4. Shocking: Porzingis won the tap.

Heat: Visit Atlanta on Wednesday, followed by visits to Cleveland and Chicago.

Check out the team sites for the New York Knicks and the Miami Heat for more game coverage.