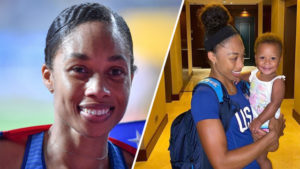 At the IAAF World Championships in Doha, Qatar, on Sunday (September 29), Felix took home the gold medal in the mixed gender 4×400m relay.

The landmark win makes Felix the first person to win 12 gold medals at the World Championships, breaking her tie with Usain Bolt, the world’s fastest man, who won 11 golds before his retirement.

Speaking after the race to NBC Sports, Felix said:

It was really special… It’s been a crazy year for me, so just to be here to be running with this great team, I just feel so blessed.

I’m just grateful to be healthy, to be working my way back. It feels good.

This is just 10 months after Felix’s daughter, Camryn, was born premature via an emergency C-section in November 2018.

As if that wasn’t hard enough, the athlete was battling pre-eclampsia, a rare pregnancy-related condition that spurs high blood pressure and swelling in the face and hands.

According to the Centres for Disease Control and Prevention, black women are three to four times more likely to die from the disorder, with the reason remaining a mystery.

Back in December 2018, talking about her fears coming back to the industry after pregnancy, Felix told ESPN:

If I come back and I’m just not the same, if I can’t make a fifth Olympic team, I’m gonna know that I fought, that I was determined, and that I gave it my absolute all.

And if it doesn’t end up the way I imagined in my head, it’ll be OK. I just have to go for it, because that’s just simply who we are now.

Felix’s decision to pursue family life came with its struggles on the professional side too. In a New York Times essay, she wrote how pregnancy is considered the ‘kiss of death’ to an athlete’s career.

This is witnessed in her relationship with Nike. She was in a difficult spot with the sponsor: she’d asked them to contractually guarantee she wouldn’t be financially punished if she wasn’t performing at her best around childbirth – Nike declined.

Today is much more positive: Felix has recently become the first sponsored athlete for Athleta, a female-focused fitness clothing brand.

Speaking to PopSugar about her experience, Felix said:

Do not sacrifice anything. You can have it all. Don’t let anyone tell you that you can’t. It’s all about how you feel, what’s important to you and your family, the decisions that you make.

I think for so long, we’ve been forced to feel like we have to pick career or family. That you can’t have them both. And I think it’s just about managing it and speaking up about things.