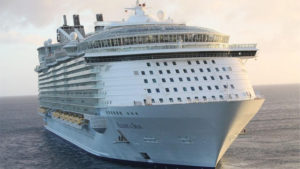 The St. Kitts Tourism Authority has confirmed that St. Kitts is one of the destinations that will be affected by itinerary changes Royal Caribbean has made with respect to Allure of the Seas.

Allure of the Seas is an Oasis-class cruise ship with a maximum capacity of 8565 passengers.

The SKTA announced that five of the ship’s planned calls to St. Kitts during the winter season have been cancelled.

Since earlier this year Allure of the Seas has experiencing a mechanical issue which causes the cruise ship to travel at reduced speeds and burn more fuel. As a result, specific itineraries had to be altered.

Royal Caribbean said that over 30 cruise itineraries have been changed as a result of propulsion problems with the Allure of the Seas ship.

The cruise line has not announced its plans to fix the issue affecting the ship however Allure of the Seas is next scheduled for dry dock upgrades in March 2020.