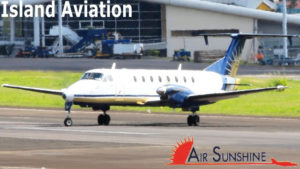 A US-based commercial airline was forced to make an emergency landing in St. Kitts on Monday morning, less than an hour after it departed the RL Bradshaw International Airport bound for Anguilla.

Reports indicate that Air Sunshine, which services Puerto Rico and several other regional destinations, took off from St. Kitts just after 9am and sometime after 10am notified airport officials that the aircraft was experiencing technical difficulty and requested a return landing.

A relative of a passenger onboard told this media house that the plane landed safely and a fire truck came onto the tarmac and led the plane to a parked position. Other fire tenders also reported to the scene but none were required to provide any services.

Some 13 persons onboard disembarked safely. Freedom FM understands that after a check of the onboard equipment the pilot and co-pilot subsequently flew the aircraft to Puerto Rico for maintenance.