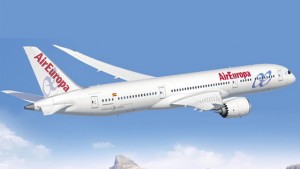 SAN JUAN, Puerto Rico, Monday March 9, 2015, CMC – The Spanish airline Air Europa says it will continue its expansion across the Caribbean by connecting daily flights between Spain and the Dominican Republic.

Seaborne – a Puerto Rican airline, will enter into a code share with the Spanish carrier to cover the route between Santo Domingo and San Juan, which will allow for daily flights and connections with the Adolfo Suarez Airport in Madrid-Barajas.

According to Air Europa’s President Juan Jose Hidlago, this will permit Air Europa passengers to fly to Puerto Rico every day.

This route will be added to the two direct flights that Air Europa has been operating between Spain and Puerto Rico since June 2014.

“This agreement represents a step forward in our mission to be the go-to airline in flying to and from Europe, America and the Caribbean. I’m sure that with Seaborne we have found a great partner, due to their impeccable trajectory and incredible punctuality index of over 98%,” Hidlago said.

The codeshare agreement between Air Europa and Seaborne will take effect on March 29.