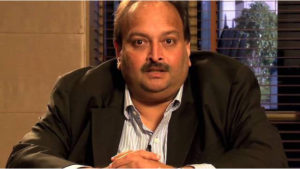 The Legal Affairs Minister, Steadroy Benjamin, is laying the blame for the issuance of an Antigua and Barbuda passport to Indian accused fraudster, Mehul Choksi, squarely on the Indian authorities.

Choksi and his nephew Nirav Modi are wanted by the Enforcement Directorate (ED) and the CBI for allegedly defrauding the Punjab National Bank of over two billion dollars.

The multi-crore PNB fraud came to light in early 2018, but reports are that the investigations began years before the scandal broke.

Benjamin told OBSERVER media yesterday that the Indian government was interviewed during the due diligence process by the officials of the Citizenship by Investment Unit and Choksi was given the “all clear.”
“We have done everything possible. We had checked with the authorities in India and they had said clearly that there was nothing at all concerning this person, and it was on that basis that we decided to issue him a passport,” Benjamin said.

According to Benjamin, the government must be able to rely on the expertise of other governments.