After Curry goes down, Durant rallies Warriors past Spurs 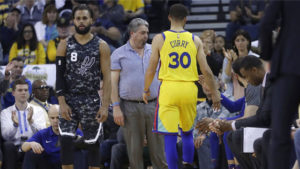 Steve Kerr chuckled not about Stephen Curry’s latest ankle trouble but just how good the Golden State Warriors can be without their two-time MVP.

Durant hit his third straight jumper to tie it with 2:01 remaining before the Warriors went ahead on Draymond Green’s putback the following possession. Klay Thompson made two free throws with 15.9 seconds left.

Bryn Forbes’ 3-point try from the top to tie it hit the front rim as the final buzzer sounded.

“I felt good shooting the midrange as always,” Durant said. “I tried to press go and shoot every time, not bad shots.”

Green had his third triple-double this season with 11 points, 12 rebounds and 10 assists.

Curry was lost for the night to a rolled right ankle early in the first quarter, then the Warriors responded without him to win their seventh straight since the All-Star break.

“It’s just always a kind of hold-your-breath type of moment when that happens,” Green said.

Durant’s 14-footer from the right wing with 3:14 left got Golden State within 103-101, and then he answered a Spurs basket with another jumper the next time.

LaMarcus Aldridge scored 30 points to lead the Spurs, who were without a star of their own after starting center Pau Gasol sprained the AC joint in his right shoulder late against Memphis on Monday.

Back-to-back Spurs dunks put San Antonio ahead 101-93 with 4:44 remaining before the Warriors mounted quite a comeback.

Golden State trailed 87-78 going into the final 12 minutes, earning a fourth straight win and eighth in 12 against San Antonio after a 122-105 home victory Feb. 10.

“We have to do a better job of just getting it to everybody and making sure we’re sharp so that we don’t have dry possessions like that in the fourth quarter,” San Antonio’s Danny Green said.

Curry tweaked his troublesome right ankle driving left for a layup at the 9:38 mark of the first quarter with two Spurs around him. He limped into the tunnel grimacing in pain and frustration, then initially stayed in the game to shoot free throws before heading to the locker room. The team said he was getting re-taped and going through tests, then Curry didn’t return — but the Warriors are going to be cautious at this stage of the season with the playoffs beginning next month.

Curry missed 11 games in December with the sprained right ankle and injured it again last Friday at Atlanta. He won’t travel or play at Portland on Friday.

Kerr is more concerned about health than the No. 1 seed now.

“We’ll get Steph healthy. We’ve proven we can win without him,” Kerr said.

Thompson began 2 for 10 and missed his first three tries from 3 before connecting from the top early in the fourth. He finished with 13 points and six assists. He needs one more 3-pointer to reach 200 or more 3s for the sixth straight season, which would tie Curry for an NBA record of most such seasons — and also for doing it in successive years. Ray Allen has the second-most seasons with 200-plus 3s in NBA history at five.

Spurs: Before the game, coach Gregg Popovich joked that Kevin McHale would start at center in place of Gasol. McHale was on the call for TNT’s broadcast of the game. … San Antonio shot 8 for 22 in the first quarter and 1 of 5 from 3-point range. … The Spurs were just 6 of 22 from deep overall.

Warriors: Golden State’s 10 turnovers matched its third-lowest total for the season. … The Warriors were 1 of 11 on 3s in the first half, trailing 50-46 at the break, and just 8 of 30 from long range — four of those 3s from Durant. … Raiders owner Mark Davis and coach Jon Gruden sat courtside.

Reserve center David West missed his second straight game with an infected cyst in his right arm. The training staff is evaluating options to determine whether it will need to be removed, yet Kerr hoped to have West’s situation resolved in the coming few days.

Rookie forward Jordan Bell, who sprained his right ankle Tuesday against Brooklyn, will be out through the weekend and re-evaluated Tuesday.

Andre Iguodala was sidelined with a sprained left wrist.

“This kind of sustained success is almost unheard of,” Kerr said of the Spurs. “So what they’ve done is remarkable.”

Spurs: At Oklahoma City on Saturday.

Warriors: At Portland on Friday looking to avenge their last defeat, 123-117 on Feb. 14 leading into the All-Star break.