After another blowout loss, LeBron James puts Cavs on notice 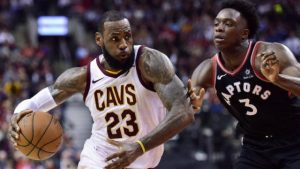 The Cleveland Cavaliers stood in silence, LeBron James lighting into each and every one of them. James understands the process of integrating an All-Star such as Isaiah Thomas after seven months of rehab, understands the chemistry needing to be rejuvenated after Kyrie Irving was shipped out. But the lack of drive and precision against the Toronto Raptors on Thursday night infuriated him in a second consecutive blowout loss. This was unfitting for a three-time defending Eastern Conference champion against a fellow contender, and so James let them all hear it.

“We all have to be held accountable,” James said later at his locker. “How hard we play. How much effort we play with. I’m trying to hold everyone accountable.”

Yes, the Raptors’ ball movement and free-flowing style has become palpable around the team, and DeMar DeRozan continues to round out his offensive game, playmaking at career-best levels and serving as a 3-point threat now.

This Toronto team appears more prepared to give Cleveland or Boston a run in May. But the Cavaliers lacked the defensive pressure and fortitude against a team without two of its starters — point guard Kyle Lowry and forward Serge Ibaka — and had minimal energy off the bench. Coming off a 28-point loss in Minneapolis, this 133-99 loss to the Raptors was uninspired.
LeBron James had 26 points in a brutal loss to the Raptors. (AP)

Thomas has made a successful return from a serious hip surgery, but is still finding his offensive rhythm, shooting 5-of-26 from the field over his past two games. Around the Cavaliers, there are no worries: Thomas will find his way, but must continue to be aggressive. There had been moments he passed when teammates expected him to shoot, almost second-guessing his shot selection rather than sticking to his gut and true game.

As teams pick up trade activity before the trade deadline, the Cavaliers are shaping up to be perhaps the most fascinating contending team. They have two first-round draft picks — including the heralded Brooklyn Nets’ selection via the Irving trade — but the superstar player whom the franchise could pursue with that pick has not been made available. Multiple NBA teams have cited Tristan Thompson as an asset Cleveland is willing to move in the right deal, such as one for the Los Angeles Clippers’ DeAndre Jordan. Nevertheless, the superstar talent of Oklahoma City’s Paul George or New Orleans’ DeMarcus Cousins, each deserving of that Nets first-rounder, won’t see the light in this trade market as of right now, league sources said, as those teams are fully focused on winning with each respective player.

There’s no quick cure for these Cavaliers, four weeks removed from the trade deadline.

“I don’t play with my words,” James said late Thursday. “We can’t play around on the court.”

“We got to play much better,” Cavaliers coach Ty Lue added.

In the middle of his fourth season back in Cleveland, James had been asked about differing agendas in the locker room, which Lue referred to postgame, signaling questions about potential issues within the locker room.

“We’re three and a half years into this, I hope not,” said James, who had 26 points, three rebounds and just one assist.

The Cavs have lost six of their past eight games, the tenor of this season reaching its most curious moment as the league’s trade deadline looms Feb. 8. There’s a need for youth, for increased defensive activity on the wing and inside. James looked around and let his team hear his words, view his actions, and now waits to see how this team responds and how this franchise could reach another level.