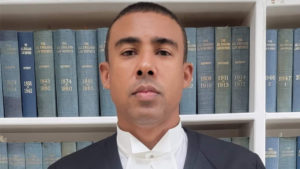 Garth was born in St Kitts, but received his early education in Antigua, Barbados and St Kitts. He is admitted to practice in St Kitts & Nevis, Anguilla, Montserrat and Antigua & Barbuda and is mainly a civil litigator. His areas of expertise include General Commercial Litigation, Banking, Insurance, Construction Litigation & Arbitration, Injunctive Relief Litigation, Employment Law and Environmental Law. Garth became a Partner of the firm in January 2017.

His article entitled: “The Doctrine of Legitimate Expectations: Its Development as a Fetter on Administrative Action in the Commonwealth Caribbean” was published in the UWI Student Law Review (March/April 2008).

During his first three years of practice, Garth acted as Crown Counsel Prosecutor in the High Courts of St Kitts, Nevis and Anguilla.

He is the President of the St Kitts & Nevis Bar Association and serves on the Management Council of the Brimstone Hill Fortress National Park Society and Board of Directors for Federation Media Group Limited, an independent media company operating as WINNFM 98.9. He is also an avid sportsman having represented St Kitts at cricket, Virginia Tech at table tennis and Harrison College (Barbados) at cricket, track and field, tennis and table tennis.