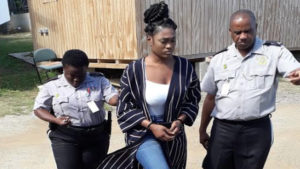 A Guyanese woman has been granted $60,000 bail with strict conditions including a curfew after she allegedly solicited a man to obtain an HIV test in her name.

She was not required to plead when she appeared before Senior Magistrate Tamia Richards on Monday.

The court heard that the accused arrived in the territory on April 20 and was granted permission to remain for 30 days.

Upon her arrival, she met and reportedly had a conversation with a man named ‘Eric’. It is alleged that he agreed to assist her in getting an HIV test.

On April 24, the accused and Eric reportedly attended Peeble’s Hospital’s laboratory and Eric identified himself as Lolita.

It is alleged that while there, the lab technician on duty asked the young man: “Are you sure that’s your name? Your mother named you Lolita?”

It is alleged that when the lab technician requested identification, the accused woman inquired where else on the island the test could be done. It is reported that she subsequently went to another medical facility.

It is further alleged that later that day, Eric who was not required to provide any form of identification, took an HIV screening test as ‘Lolita Callendar’.

When the test was done, the accused along with Eric returned to the lab for the results, the court heard.

Prosecutors claimed the receptionist on duty proceeded to stamp the results of the test when the accused Guyanese woman interrupted her and asked to see the document before it was stamped.

The court heard that after reviewing it, the accused asked that the gender be changed from male to female. The receptionist then asked if the results were hers and she responded ‘yes’, it is alleged.

The court further heard that receptionist then took the results to be signed by the technician.

The two then took the results, the court heard. But before leaving the medical facility, Eric reportedly asked laboratory employees: “Why can’t a man be named Lolita?”

The court heard that the accused woman then posted the results on social media site, Facebook.

The matter was subsequently reported to the police who launched an investigation.

Callendar-Skelton was later met at the Road Town ferry dock where she was arrested, interviewed, and charged.

During their submissions, the Crown argued that while they were not objecting to bail, strict conditions should be imposed on the accused woman.

The Crown argued that Callendar-Skelton not being a resident of the territory and the fact that the man named ‘Eric’ is still at large meant she could possibly interfere with the investigation.

The Crown also pointed to the seriousness of the offence.

As such, the court ordered her to she surrender her travel documents and report to the Road Town Police Station from Monday to Saturday between 6 am and 12 pm.

A daily curfew of 6pm to 7am was also imposed on the accused woman.

Her matter was then adjourned to June 5.