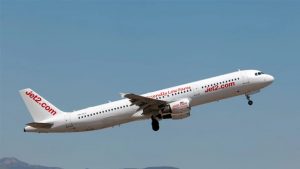 A passenger jet flying from Turkey to the UK was intercepted by fighter jets shortly before it was due to land on Wednesday following an alleged security threat.

The flight, LS922, from Dalaman in Turkey to Manchester Airport, operated by regional airline Jet2, was diverted to land at London Stansted Airport, around 200 miles its destination.

The unscheduled diversion was made “under the direction of UK authorities,” the airline said via its official Twitter account Wednesday.

“We understand that the authorities were alerted to a potential security threat,” Jet2 said, responding to a post by the account Flight Emergency.

The local police force, Essex Police, confirmed in a tweet the following day, that officers led a safety operation after receiving a report of a “potential threat on board” shortly just before 9:00 p.m. on Wednesday.

After landing the plane taxied to a remote area of the airport, away from the main passenger terminal, where passengers were disembarked so local police could investigate.

“The runway was closed for a time while enquiries were carried out. Officers were then able to establish there was no threat on board,” Essex Police said in a later tweet.

“We would like to apologise to everyone onboard for any inconvenience or upset caused by this unforeseen incident. We understand that the authorities were alerted to a potential security threat, however this was soon downgraded and the incident was declared over,” the spokesperson said.

It has not been revealed what caused the security incident, though some media outlets reported it as a bomb threat.

In a statement to Sky News, a spokesperson for the Royal Air Force, said that Quick Reaction Alert Typhoon aircraft were launched from RAF Coningsby, to intercept a civilian aircraft that was “causing concern.” The RAF didn’t immediately respond when contacted by Insider for comment.

Stansted Airport did not immediately respond to Insider’s request for further comment.

According to the flight tracking service FlightRadar, the Airbus A321, registration G-HLYB, flew to Manchester airport on October 13.