A familiar face is pushing the Pelicans to new heights: Playoff Rondo 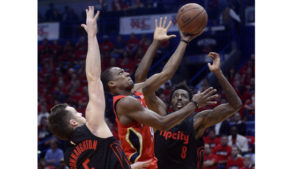 Playoff Rondo — not to be confused with Regular-Season Rondo, a competent playmaker whose numbers won’t wow you — hit the floor for 29 minutes in Game 3 of New Orleans’ 119-102 first-round win over Portland. He scored 16 points and dished out 11 assists. Damian Lillard is an MVP candidate, C.J. McCollum is an elite scorer … and Rondo, 32, was the best guard on the floor.

How do you explain Playoff Rondo? Because remember: This isn’t a new thing, either. In 2008, Rondo — a 22-year-old playmaker tasked with orchestrating an offense headlined by three Hall of Famers — averaged 10.2 points and 6.6 assists in Boston’s championship run. For the next four postseasons, Rondo’s playoff numbers eclipsed his production in the regular season.

Fast forward to last season, a forgettable one, for the most part. In his lone season in Chicago, Rondo beefed with his veteran teammates and quarreled with his coach. The Bulls squeaked into the playoffs as the No. 8 seed, and then, backed by Rondo, beat Boston in the first two games of the series. The Bulls likely would have won the series had Rondo not missed the rest of it with a hand injury.

So what is it? How does a player who has been known to sleepwalk through stretches of the regular season suddenly morph into an elite playoff performer?

“I just that think that … there’s a whole new focus level there that you reach when the playoffs start,” Gentry said. “When you’ve been in a situation like Rondo has, where you’ve won a championship and you understand the level that you have to get to in order to win a championship, there’s a focus there that you may not have during the regular season when you’re talking about playing 82 games. He understands how valuable every possession is when the postseason starts. It’s just a focus that you have to have to get to that level, I think.”

“What happened [against Boston] is the same thing that’s happening right now,” Mirotic said. “On both sides of the court. Defensively, he’s talking every time. He knows what they are playing. He’s telling us, ‘A.D. [Anthony Davis], they are going to run [something] for your guy.’ He’s a big part of why we are playing this way.”

Inside the Pelicans’ locker room, the tales are similar about Rondo’s focus. After winning two straight in Portland, Rondo was the first to remind his teammates that they hadn’t accomplished anything. Of his obsessive game study, teammates talk of late-night texts from Rondo with an observation he had seen on game footage. As Rondo dressed in front of his locker Thursday, game footage played on a laptop in front of him.

“He’s more locked in,” Davis said. “He’s watching film all night. He’s on us all the time. His mentality has definitely changed.”

Standing outside the Pelicans’ locker room, Bill Duffy could only smile. Duffy — Rondo’s agent since he entered the NBA in 2006 — has seen the highs and lows. He was there for the nasty breakup in Dallas and a wheel-spinning season in Sacramento. He watched Rondo battle through a tough season in Chicago and last summer guided him to New Orleans — one of the few teams that wanted him.

“I don’t know that anyone has had a better feel for the game, for how you win, for matchups, for timing, for tempo,” Duffy said. “He’s just a master. And then he raises the play of other guys. He’s one of the few guards who’s looking to get everybody in. Other guys try to create their own offense, and other guys get involved because of that. His focus is to get everybody involved. He just wants to win. And when he can see the light at the end of the tunnel, he goes for it.”

New Orleans is well past the point of being satisfied just making the playoffs, and with a commanding 3-0 lead over Portland, the Pelicans are thinking big. The defense is clicking; Lillard says New Orleans is throwing looks at him that he hasn’t seen all season. Mirotic dropped 30 points on Thursday, Davis is averaging nearly 30 for the series, and Jrue Holiday is a defensive menace.

And there is Rondo. Cherry-red T-shirts draped every seat at the Smoothie King Center on Thursday. On the back were the names of Davis, Holiday, Mirotic … and Playoff Rondo. Once deemed divisive, Rondo is bringing the Pelicans together. After three years in the basketball wilderness, Rondo has found a home.