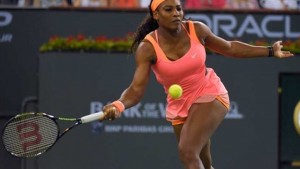 KEY BISCAYNE, Fla. (AP) – Serena Williams abused her racket, scolded herself and even made angry faces at the sun.

In the end, as usual, she took out her frustration on the ball.

The seven-time Key Biscayne champion overcame her annoyance and shaky play Wednesday for her 700th career tennis victory, beating Sabine Lisicki 7-6 (4), 1-6, 6-3 to reach the semi-finals of the Miami Open.

Williams won despite an unreliable serve, a poor second set and 51 unforced errors. She looked flatfooted and listless at times, and seemed especially vexed when playing on the side looking into the sun.

“It’s always tough on that side,” she said. “You just don’t see. You just have to adjust.”

She did, earning her 16th consecutive victory on Key Biscayne, where she’s the two-time defending champion.

Two-time champion Andy Murray (left) advanced to the men’s semi-finals by rallying past unseeded Dominic Thiem 3-6, 6-4, 6-1. Murray’s opponent Friday will be the winner of the quarter-final Wednesday night between No. 8 Tomas Berdych and unseeded Juan Monaco.

Williams improved her career record to 700-120, making her the eighth woman in the Open Era to reach the milestone. She was presented with a cake on the court, similar to the honour Murray received following his 500th victory Tuesday.

The No. 1-seeded Williams withdrew before the Indian Wells semi-final earlier this month with a right knee injury, but she has won 19 consecutive matches this year. Her opponent Thursday will be the winner of the match Wednesday night between unseeded American Sloane Stephens and No. 3 Simona Halep.