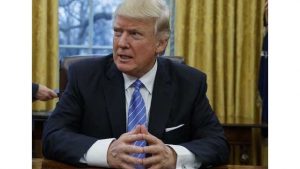 WASHINGTON — A new book by Bob Woodward, the longtime Washington Post reporter, portrays a White House with relentless infighting and a work culture so toxic and volatile that many of President Trump’s top advisers and cabinet members became accustomed to working around their boss, whom they described as unstable and uninformed.

“Fear: Trump in the White House,” which is set for a public release next Tuesday and already sits atop Amazon’s best-seller list, is one in a series of insider accounts published this year that have drawn the ire of the West Wing. “Fire and Fury,” by the writer Michael Wolff, and “Unhinged,” by the former White House adviser Omarosa Manigault Newman, also reported the kind of hostility and interpersonal feuding that Mr. Woodward depicts. Mr. Trump reacted to both books with numerous tweets targeting the authors.

On Tuesday, after copies of Mr. Woodward’s book leaked to reporters, Mr. Trump told The Daily Caller that parts of it may have been made up.

Here are some key takeaways from the book.

The Russia investigation is a constant source of anxiety for Mr. Trump, and for his lawyers.
In late January, Mr. Woodward wrote, Mr. Trump sat down with John Dowd, then an outside lawyer advising the president on the White House’s interactions with Robert S. Mueller III, the special counsel. The idea was to stage a mock interview between the president and Mr. Mueller, who was angling to question Mr. Trump. During the session, Mr. Trump repeatedly lied and contradicted himself, insulted the former F.B.I. director James B. Comey, then exploded in anger, ranting for a half-hour about the investigation being a “hoax.”

Mr. Dowd tried to demonstrate why their meeting was reason for Mr. Trump not to do an interview with Mr. Mueller, citing the president’s schedule demands.

“It’s not that you’re lying or you’re bad or anything like that,” Mr. Dowd told him. “Given your daily intake — just look what we’ve done this afternoon.”

Mr. Dowd handed him a letter addressed to Mr. Mueller asserting the president’s right to terminate the investigation. Mr. Trump loved it.

The day after, a gleeful Mr. Trump called Mr. Dowd. “I slept like a rock,” the president said. “I love that letter.”

By March, little progress had been made with Mr. Mueller. On March 5, Mr. Dowd met with the special counsel and one of his deputies and explained why he was trying to keep Mr. Trump away from them.

“I’m not going to sit there and let him look like an idiot,” he said.

Later that month, Mr. Dowd told Mr. Trump why he should avoid an interview: “It’s either that or an orange jumpsuit.”

Mr. Mueller engaged in lively conversations for months with Mr. Trump’s lawyers.
The book offers the first extensive look at dialogue between Mr. Mueller and those involved in the Russia investigation. Mr. Woodward recounted Mr. Dowd’s zigzagging relationship with the special counsel’s office, and the lengths he went to to build a rapport with Mr. Mueller in the heat of negotiations over an interview with Mr. Trump. Mr. Dowd fluctuated between credulity and outrage, at one point telling Mr. Trump after an especially trying meeting with Mr. Mueller that the president may have been right about the special counsel all along.

Mr. Woodward wrote that Mr. Dowd would tell Mr. Mueller that the president did not have time for the inquiry while he was juggling the responsibilities of his new job.

“I’m very sensitive to that,” Mr. Mueller reportedly responded. “I’m doing the best I can.”

Still, Mr. Mueller at one point told Mr. Dowd that he could acquire a grand jury subpoena, which Mr. Dowd interpreted as a threat.

In one meeting with Mr. Mueller, Mr. Dowd, to make plain just how much he feared that Mr. Trump would commit perjury, asked Jay Sekulow, another one of Mr. Trump’s lawyers, to re-enact Mr. Trump’s practice session from January. Mr. Sekulow, playing Mr. Trump, imitated an answer to a question about Mr. Comey.

Mr. Trump’s advisers are repeatedly stunned by the president’s lack of interest in and knowledge of major issues.
Mr. Woodward used several defense-related meetings to illustrate the president’s problem grasping his own administration’s policy, including a July 2017 gathering at the Pentagon between Mr. Trump, military brass and members of his cabinet.

At a January meeting of the National Security Council, Mr. Trump asked why the United States was spending so much on the Korean Peninsula.

In another episode, Gary D. Cohn, the former chief economic adviser to Mr. Trump, “stole” a letter from Mr. Trump’s desk that the president had planned to sign, withdrawing the United States from a trade deal with South Korea. Mr. Woodward wrote that Mr. Cohn told a colleague that he had to “protect the country.” Mr. Trump apparently never realized the letter had disappeared.

In his interview with The Daily Caller, Mr. Trump denied that Mr. Cohn had taken the letter. “There was nobody taking anything from me,” he said.

Mr. Woodward also prints a summary of the July 2017 meeting written by a senior White House official who spoke with its attendees.

“It seems clear that many of the president’s senior advisers, especially those in the national security realm, are extremely concerned with his erratic nature, his relative ignorance, his inability to learn, as well as what they consider his dangerous views,” it read.

Mr. Trump himself was not a primary source for the book.
Mr. Woodward conducted most of his interviews on “deep background,” meaning he could incorporate the material without citing from whom it came. Throughout the book, he described settings and events with exhaustively reported detail, incorporating what he said in a note in the book were “hundreds of hours of interviews with firsthand participants.”

But, Mr. Woodward said in the same note, Mr. Trump declined to be interviewed, leaving the tale largely his advisers’ telling.

The Washington Post published audio of an 11-minute call between Mr. Woodward and Mr. Trump in which Mr. Woodward warned the president that his book would be severe, and expressed regret that he never had a chance to incorporate Mr. Trump’s view of his own job. Mr. Trump sounded incredulous that he never got to sit for an interview and defend himself to the author. Mr. Woodward told him that he made the request to at least a half-dozen people close to the president, and that it was never granted.

On the call, Mr. Trump sounded worried, repeating his refrain that it would be a “bad” book for him, and that Mr. Woodward did not understand just how successful he had been in office.

“So we’re going to have a very inaccurate book, and that’s too bad,” Mr. Trump said.

“It’s going to be accurate, I promise,” Mr. Woodward responded.

“Yeah, O.K.,” Mr. Trump said. “Well, accurate is that nobody’s ever done a better job than I’m doing as president.”

John F. Kelly, the chief of staff, quickly soured on Mr. Trump
Mr. Kelly, who has long been rumored to be close to resigning, once called Mr. Trump an “idiot” and said the White House staff was operating in “crazytown,” according to the book.

“It’s pointless to try to convince him of anything,” Mr. Kelly bemoaned in a meeting. “He’s gone off the rails.”

Mr. Trump came to be suspicious of Mr. Kelly’s scrupulousness, finding workarounds, such as calling members of Congress when Mr. Kelly was not in the room.

When Mr. Cohn tried to resign over comments Mr. Trump had made after a white nationalist march in Charlottesville, Va., in August 2017, Mr. Trump belittled him but persuaded him to stay. Mr. Kelly then pulled Mr. Cohn aside to express his dismay over how Mr. Cohn was treated.

“That was the greatest show of self-control I have ever seen,” Mr. Kelly said. “If that was me, I would have taken that resignation letter and shoved it up his ass six different times.”

“I’m the only thing protecting the president from the press,” Mr. Woodward quoted Mr. Kelly as saying in a meeting. “The press is out to get him. They want to destroy him. And I’m determined to stand in the way, taking the bullets and taking the arrows.”

On Tuesday, Mr. Kelly denied in a statement that he had ever called Mr. Trump an “idiot.”

Mr. Trump, apparently unconcerned about the rest of the book’s drama involving Mr. Kelly, posted the statement on Twitter on Tuesday evening.