$5 million worth of marijuana seized on port of Kingston 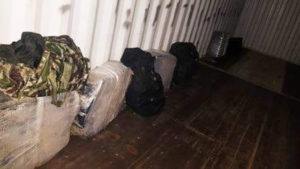 The marijuana found on the port of Kingston Friday.

OFFICERS from the Jamaica Customs Contraband Enforcement Team, along with others from the Jamaica Constabulary Force’s (JCF) Narcotics Division and Port Security seized 15 packages containing marijuana during a port sweep on Friday.

During a routine patrol on the port of Kingston, 15 packages were observed in an empty container. When probed, the packages were found to contain parcels of vegetable matter that was field tested to be marijuana weighing 1,156.2 lbs with an approximate street value of five million dollars.

The matter is currently being investigated by the Border Protection Division of the Jamaica Customs Agency and the JCF’s Narcotics Division.

No arrest has been made in connection with the seizure.