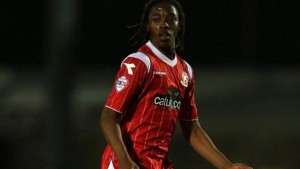 St Kitts and Nevis National Midfielder Romaine Sawyer has been the outstanding player in England’s League One this season.

The form of Sawyers for Walsall has got Celtic interested

Sawyers has scored six goals to aid his team ’s promotion push and has attracted an army of admirers to the Bescot Stadium.

The 24-year-old played a key role again for his team as they beat Port Vale 2-0 in yesterday’s lunchtime encounter.

Record Sport understands Celtic scouts were among those in attendance to run the rule over the international, who has 15 caps.

But it’s Sawyers who is on the radar. And with his contract due to expire in the summer, he could be snapped up next month for a fraction of his true value or even on a pre-contract deal.

Born in Birmingham, Sawyers was snapped up by West Brom for their Academy set-up and was loaned to Port Vale, Shrewsbury and Walsall before signing for the Saddlers after his release from the Hawthorns.

Meanwhile, Deila has poured cold water on talk Scott Allan and Anthony Stokes are heading to Hibs on loan. He said: “There is no chance of Scott leaving. He is in our squad so why should he go to another club?

“Also, my task is to have Anthony Stokes as good as possible and that’s what I want.”