Home / Sports / 23-0: A reminder about the importance of Klay Thompson 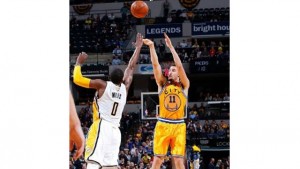 INDIANAPOLIS — It’s 23 wins and counting, hopefully on Klay Thompson’s healthy return. Thompson, an All-Star shooting guard, delivered his best performance of the season in the Golden State Warriors’ 131-123 win over the Indiana Pacers, before succumbing to a sprained ankle near the end. The game was a reminder of Thompson’s value, which can be understated until it explodes on the scene.

Tuesday night was such a scene. Thompson started off molten, flinging in eight 3-pointers and 29 points in the first half. He finished with 39 points and 10 3-pointers, one shy of his personal best and two off the NBA record. One could sense the building hot streak when Thompson hit his second 3-pointer after dribbling into it, as he’d done when playing at peak levels last season.

Steph Curry’s takeover sequences are special, but Klay’s moments are captivating in their own manner. When Curry’s on, he’s liable to beat a defense with a variety of moves, passes and shots. That’s exciting. When Thompson’s on, he’s almost impervious to defense, relentlessly swishing the same kind of shot like an inexorable deluge, rushing at the overwhelmed opposition. That’s also quite exciting.

Another difference between the takeover modes is that Curry mostly stalks a defense alone, whereas teammates are usually highly involved when Thompson’s on a run. It’s actually usually Curry leading the charge to feed Thompson when Thompson’s in need of feeding. One sequence near the end of the half illustrated this. A falling punch pass from Andrew Bogut gave Curry a wide-open look from 3-point range. He passed it up to find Thompson for an angle 3.

On whether he consciously feeds Thompson in these moments, Curry said, “Yeah, try to. Obviously the defense knows he’s hot. I did that at the beginning of the first half.” Curry conceded that, later in the game he “threw a crazy pass trying to force it to him, and Paul George didn’t even move off of him an inch. Just because he had made eight [3-pointers] in the first half, I had already predetermined what I was going to do. But definitely want to feed the hot hand in those situations and try to get him as clean a look as I can.”

In general, Golden State coaches would probably prefer the team not force it to just one guy, but they can’t be too frustrated. That Curry and his teammates suddenly join forces to feed their teammate’s moment is indicative of unselfishness, after all.

Thompson is fueled by that vote of confidence, perhaps more than any Warrior. Many NBA athletes profess to have always assumed they’d make it to this level. Thompson has stated that he didn’t envision a pro career until age 21. His father, former Laker Mychal Thompson, has spent years trying to convince Thompson of his talent. Klay Thompson is the reluctant All-Star, liable to realize his gifts only when everyone’s reminding him.

Confidence probably wasn’t the issue earlier this season, when Thompson wasn’t playing up to his usual standard. He had a stiff, sore back, something that kept him out of a Nov. 14 home game against Brooklyn. Thompson says his back has fully healed now, thanks to the work of Warriors performance therapist Chelsea Lane. Just as Tuesday night’s game was a reminder of what Thompson can do, the game against the Nets spoke to what his absence means. The Warriors found their offense constrained without their elite floor-spacer and needed overtime to best the East’s bottom feeder.

Now Golden State might be faced with such a reality again, perhaps with some regret. They claimed a 26-point lead over the Pacers after three quarters. The second unit faltered, prompting Thompson’s return to action. Then Golden State’s oft-reliable unit with Draymond Green at center didn’t close as it usually does.

As a result, the Pacers lingered up until the point Thompson sprained his right ankle. Thompson was nonchalant about the injury, insisting multiple times that he would be fine. “I’ll be alright,” he said. “Luckily it’s not a bad sprain.”

The Warriors certainly hope so, as they take a break to recover and play the Celtics in Boston on Friday. Shortly after beholding the benefit of a healthy Klay, the Warriors must wait for his return. In the short term, that’s a threat to their vaunted, historic winning streak. In the long term, if Thompson comes back looking anywhere close to Tuesday night’s version, that’s a threat to everyone.