Home / Regional / 10% Value Added Tax to be implemented in Suriname

10% Value Added Tax to be implemented in Suriname 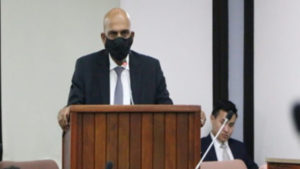 The National Assembly (DNA) late Tuesday gave the green light to the Dutch-speaking Caribbean Community (CARICOM) implementing a 10 per cent value added tax (VAT) even as several business organisations, including the Suriname Business Association (SBA), the Chamber of Commerce and Industry (CCI) and the Association of Surinamese Manufacturers (ASM) had urged legislators to approve a lesser VAT.

By a vote of 26 to 12, with the main opposition National Democratic Party (NDP) voting against the measure and the NPS, one of the government partners supporting the legislation “under duress”.

Ivanildo Plein, one of the three government legislators voted in favour, while the other two including NPS leader Gregory Russia and Patricia Etnel stayed away from the vote in protest.

Plein said while the NPS is in favour of introducing VAT to replace turnover tax, the party had urged the government of President Chan Santokhi to reconsider its 10 per cent proposal and come up with a lower rate.

However, the NPS said it found the five per cent proposal by the opposition unrealistic because it would not achieve the government objectives, such as a reduction in payroll taxes from January 1, 2023.

“We are going to vote for it under protest and conditions, at least I am,” said Plein, adding “the condition is that other tax-relieving laws are passed before January 1, 2023, so that they can enter into force together with the VAT.”

He said the NPS’s position should signal to the government that the party is “not happy with the 10 percent VAT but are cooperating in the greater interest”.

One other opposition party, the BEP, abstained from voting with its leader, Ronny Asabina saying that the VAT should be less than 10 per cent.

Finance and Planning Minister Armand Achaibersing said with a rate of five per cent, the government would run into problems with other tax-reducing measures and the social safety net.

But NDP legislators argued that living in Suriname will become “more unbearable” and would have preferred the government starting at a five per cent level and increasing it if necessary.

Earlier this month, the business and employers’ organizations had proposed a five per cent VAT and in a 15-page letter to the National Assembly, outlined various proposals to amend the VAT law.

They warned that the legislation will have a “serious disruptive effect on the already fragile economy”. In addition, they argue that the goals, such as increasing government revenue, will hardly be achieved compared to the damage it will do to the competitive position of businesses among themselves and already severely weakened purchasing power of society.