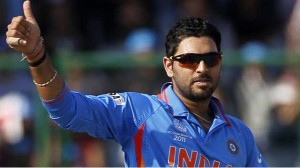 India have omitted all-rounder Yuvraj Singh, 32, from their preliminary squad for next year’s Cricket World Cup.

Batsmen Virender Sehwag, 36, and Gautam Gambhir, 32, and swing bowler Zaheer Khan, 36, were also left out, along with spinner Harbhajan Singh, 34.

All five played in India’s victorious campaign at the 2011 World Cup, where Yuvraj was named Man of the Tournament.

Yuvraj recovered from being diagnosed with cancer in 2012 to play in India’s campaign at this year’s World T20, but he has not featured in recent India squads in the 50-over format.

The 2015 World Cup takes place in Australia and New Zealand from 14 February to 29 March.