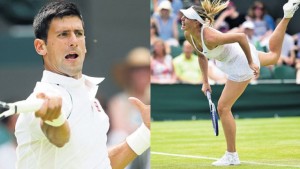 But Japanese star Kei Nishikori was forced to withdraw with a calf injury while Ana Ivanovic became the third woman in the top 10 to be knocked out in the first three days.

Defending champion and top seed Djokovic reached the third round with a 6-4, 6-2, 6-3 victory over Jarkko Nieminen which brought the curtain down on the Finn’s Wimbledon career.

Djokovic will take on Australian 27th seed Bernard Tomic for a place in the last 16 as the Serb continues his bid to win a third Wimbledon and ninth Grand Slam crown.

It was Djokovic’s sixth career win in seven meetings against the 33-year-old Nieminen and the two men exchanged a warm embrace at the net once their 92-minute Centre Court duel had ended.

“It was his last Wimbledon so I congratulated him on a great career,” said Djokovic.

Women’s top seed and five-time champion Serena Williams cruised into the third round with a 6-4, 6-1 victory over Hungary’s Timea Babos with 12 aces and 23 winners in just 59 minutes on Centre Court.

The 33-year-old, bidding for a third Grand Slam title of the year, will play Britain’s Heather Watson for a place in the last 16.

“I’m definitely playing well, which I never say, but I had two really tough matches straight off the bat so I had to pick up my game,” Serena said.

Sister Venus, also a five-time Wimbledon winner and a potential fourth round opponent, went through, beating Yulia Putintseva of Kazakhstan 7-6 (7/5), 6-4.

However, Djokovic, who has played in 40C at the Australian Open, said: “It wasn’t as bad as I thought. People were talking about it and predicting really difficult conditions. But I didn’t find it as difficult as I thought it might be.”

Fifth-seeded Nishikori had been scheduled to face Colombian world number 60 Santiago Giraldo on Centre Court for a place in the last 32.

But the 25-year-old admitted that the left calf injury he suffered last month in Halle, which had forced him to retire in the semi-finals, was still a factor during his gruelling win over Simone Bolelli in the first round at Wimbledon on Monday.

Giraldo goes on to face US wildcard Denis Kudla for a third round spot.

Ivanovic had reached the semi-finals at Wimbledon in 2007 and was heavy favourite to beat her world ranked 158 opponent.

Mattek-Sands will face Swiss teenager Belinda Bencic for a place in the last 16.

Ivanovic is the third top 10 seed to lose this week after third seed Simona Halep and ninth-seed Carla Suarez Navarro exited in the first round.

Nick Kyrgios, the temperamental Australian who knocked out Rafael Nadal last year, ranted and raved at officials for the second match in succession as he beat Argentina’s Juan Monaco 7-6 (7/5), 6-3, 6-4.

Fourth seed and French Open champion Stan Wawrinka reached the third round with a 6-3, 6-4, 7-5 win over Dominica’s Victor Estrella and next face Spain’s Fernando Verdasco.