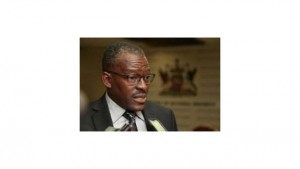 “We have seen an increase in the amount of people coming here,” National Security Minister Edmund Dillon said, indicating that he had discussed the matter in Caracas two weeks ago.

“We even went as far as to discuss Coast Guard officers on a Venezuelan vessel and Venezuelan officers on a Trinidad vessel, so we have that cooperation in patrolling.” Dillon said, adding this would facilitate coordination on both side of the dividing maritime line.

“He will be here until Friday and part of the discussion is how do we co-operate with one another in patrolling the Gulf of Paria,” Dillon said.
Several Venezuelans have arrived here on shopping expeditions as well as seeking employment opportunities as a result of the unrest in their country as opposition forces move to oust President Nicolas Maduro, blaming him for the socio-economic problems facing the oil –rich country.

During an official visit to Port of Spain last month, Maduro signed an agreement to purchase US$50 million worth of goods and services.

Dillion said in August, there will be a exercise codenamed “‘VenTri’ (Venezuela/ Trinidad ) involving both Venezuelan and the local Coast Guard working together in actual patrols to foster a closer relationship between both entities.

He said once the joint patrols are established “T&T Coast Guard will patrol from north to south and they (Venezuela) will patrol south to north”.

“I think the Coast Guard needs additional resources,” Dillon said, noting “in terms of the illegal movement of people, guns, ammunition, this is where the maritime security environment comes in. “It is extremely important and the Coast Guard has been increasing our land based patrols, so there is a co-ordinated joint patrol on the land and to some extent at sea,” Dillon said.