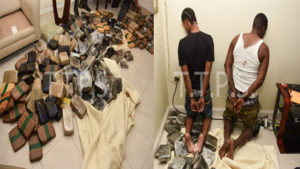 Police on Tuesday made a multi-million-dollar drug, firearm and ammunition bust at an apartment in an upscale residential area and arrested five people.

And according to media reports, intelligence had revealed that there was a Venezuelan/Mexican drug cartel link to the seizure which is valued at approximately TT$15 million (US$2.2 million).

Acting on intelligence, the Special Operations Response Team (SORT) and Commissioner of Police Gary Griffith went to the residence in Westmoorings, Diego Martin, west of the capital Port of Spain, around midday, and discovered the large quantities of drugs and firearms.

Two men and two women were arrested at the house, while a fifth suspect who fled the scene in a BMW was intercepted by police not too far away.

He said the Trinidad and Tobago Police Service (TTPS) was going after all those responsible for the drug trade, no matter where they were.

Asked by a reporter to give, in one sentence, a message to drug traffickers and drug dealers in the twin-island republic, the top cop replied: “happy hour over.”