Home / Sports / The rise and fall of Carlos Brathwaite

The rise and fall of Carlos Brathwaite 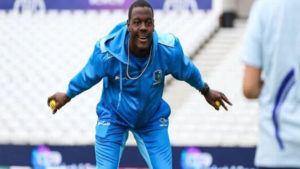 Like the fabled legend Heracles, Carlos Brathwaite dutifully completed the impossible labour of lifting a seemingly down and out West Indies to an unlikely triumph over England at the 2016 T20 World Cup final.

In its aftermath, much like the mythical Greek hero, he would soon after, however, happened upon a poisoned cloak of his own; unrealistic, heavy expectations which have so far proven to be his undoing.

Needing 19 off the last over and the ball in the hands of a capable Ben Stokes, few would have picked the Windies to be triumphant.

Four straight sixes later, however, the shrill blast of commentator Ian Bishop sang, “remember the name!” after the muscle-bound Brathwaite brutally battered Stokes, announcing a new West Indies star had been born. Gleefully looking on, fans secretly hoped perhaps the player was from the same mould as legends like Sir Viv Richards or Chris Gayle.

Of course, Brathwaite’s trajectory never hit such heights, the fateful T20 World Cup represented unprecedented heights, and his descent seemed just as rapid as his rise. Perhaps he just hit the sky too fast too soon.

Less than two years later “remember the name!” has become a term of derision, not inspiration, uttered whenever the behemoth wafted powerfully but failed to connect or managed to move the ball just feet after a blustery swing.

The man, who had delivered a victory for the West Indies, the hero of the 2016 battle at Wankhede, went from being captain to being left out of the squad entirely. He went from being a well-sought-after T20 name in most major leagues to reserve spots or replacement selection.

Ironically, Stokes, who the big West Indian had left deflated on his haunches, has gone on to be one of the world’s best players and is likely to be at the next World Cup, while Brathwaite is almost certainly guaranteed to not be. In fact, his failure on the biggest of stages, in the end, seemed to serve as a benefit as the Englishman rebounded from his lowest point to great heights.

For Brathwaite, it was the opposite. With only eight T20 matches under his belt, he was named the West Indies captain later that year. In the IPL, he went from a modest US$30, 000 base price to being signed for US$626,000 by the Delhi Daredevils. It was a whirlwind couple of months for the player, who was expected to now dispatch bowlers every time he went out to bat while at the same time ensuring the Windies lived up to their billing as world champions. Neither happened. Brathwaite was also added to the ODI squad and went on to play seven and was called to the CPL and played a Test against India in Antigua, after two earlier Tests against Australia Down Under.

The rest, as they say, is unfortunately history. In the end, it seems the weight of the expectations proved too much for the player. Brathwaite had been pushed too far, too high, too soon.

When we saw him at his best, the moment for which he will forever be immortalized, very little if anything was expected of him and he was free to swing for the fences. Who knows what he might have become had he like Stokes failed to deliver on the big occasion? (SportsMax)