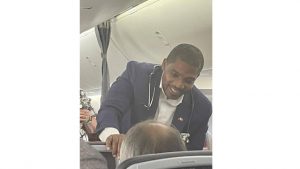 The patient, who Prime Minister of St Kitts and Nevis, Dr Terrance Drew helped revive on a flight from Miami to St Kitts, is said to be doing well.

“Once a doctor, always a doctor you can’t throw away the stethoscope,” is what Dr Drew told ZIZ Broadcasting Corporation in an interview as he recalled exactly what happened on that day.

The prime minister said he was on the flight sitting after such a long trip from Taiwan (11 hours) and Los Angeles to Miami (another five hours) and took the opportunity to take a little bit of rest.

“Then I heard the air hostess ask if there was a doctor on board. It was said calmly as it should have been said… I did not move immediately and listened again if I heard correctly.”

Dr Drew said it was only after it was asked again if there was a doctor on board did he immediately confirm that it was indeed what was said… took his seat belt off and walked towards where the patient was and realised he was unresponsive.

Dr Drew said his first initial assessment was the patient’s pulse was either extremely weak to the point he could not detect it and so they proceeded to move to get the patient into a position on the ground in the aisle area to start chest compressions.

The prime minister recalled that once he moved the patient and elevated the legs to get some blood flowing back, he recognised when the patient was sitting, he started to come around more and more.

Dr Drew was able to examine, take his vital signs and realise the patient had become stable. A call was made to emergency persons and the prime minister handed over his initial assessment and report that after taking the blood pressure and listening to the heart, the pulse and so forth, the patient had become stabilised and advised the patient should not travel on the flight but get to another centre to do more in-depth studies to determine what was the cause of the episode he had suffered.

“From my last enquiries the patient is doing well and I continue to wish him well,” as the Prime Minister of St Kitts and Nevis said he was happy to be in a position to help the patient. He also thanked those on board who assisted.