Home / Sports / Scents of where they are: Stephen Curry, Warriors one win away from title

Scents of where they are: Stephen Curry, Warriors one win away from title 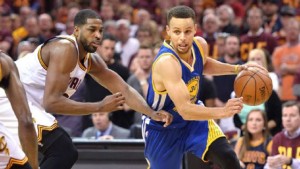 CLEVELAND — Before Stephen Curry and the Golden State Warriors returned to familiar form, they noshed on some familiar food. The night before his 38-point, six-assist effort in service of a 108-97 victory over the Cleveland Cavaliers on Friday to push their NBA Finals lead to 3-1, Golden State elected to hold its team dinner at Morton’s, the establishment that catered the Warriors’ 2015 championship celebration.

“It’s been good to us,” a victorious Curry said in the locker room with a smile. Earlier in the season, Curry joked that Cleveland’s visitor’s locker room had “smelled like Morton’s,” an allusion to that evening’s catering and his excerpted, viral, controversial comment about that locker room smelling like “champagne.” Back then, he added, “It’s a good smell.” That’s as close as you’ll get to Curry sounding like the fictional, famously unflappable Lieutenant Bill Kilgore.

On Thursday, the MVP had dined on salmon, while his fellow Splash Brother, Klay Thompson, scarfed down a lobster. Ohio might not be known for its ocean fare, but the Warriors love it here.

These Warriors boast associations with ultimate success, memories to draw on when the whole world calls you an imposter. On television, social media and nearly every other sector in the sporting sphere, people questioned Curry.

For those who’d always been suspicious of his kind of dominance, the rough beginning served as an opening. To that crowd, any mention of Curry’s knee was more excuse than explanation — just another farce, designed to prop up a false prophet.

As Curry’s reputation went on trial in the 48 hours leading up to Game 4, his coach offered a reminder of how ephemeral all these seemingly massive debates are. Steve Kerr told his MVP the story of “Tragic Johnson” — how a poor end to the 1984 Finals had irrevocably ruined Magic’s reputation — or so it seemed. To Kerr, as a young, diehard Laker fan, it felt like the walls were crashing down on Magic, swallowing his legend whole.

But Johnson’s career continued, brilliantly as before. He won championships, erasing the popular memory of that “choke.” Ultimately, the trial of Magic’s reputation had happened all for naught. The lesson? Even if you try your best in these Finals and lose, it’s not the end of the world.

Curry absorbed the lesson, though he might not have even needed to. “He’s so grounded,” Kerr reminded, as he often does about his superstar.

After his struggles in Game 3, Curry was asked if he was worried about not looking “MVP caliber.” He responded: “No, I’m disappointed that I didn’t do anything to help my team win tonight. It’s not about living up to a certain expectation other than the one that I have for myself, and I haven’t done that, or I didn’t do that tonight, and I’ve got to be better.”

That’s his standard, and his focus as former players and sports pundits howl in his direction. According to those who know him best, Curry is more internally motivated than most. Warriors assistant coach Bruce Fraser, the man trusted to work out Curry on a daily basis, said the MVP goes out there “without fear of judgment.”

That’s difficult to believe, but it’s also hard to dispute. There’s an assuredness to the Curry experience. Fans who show up to watch his early shooting routine sometimes comment that he misses more than you’d expect in warm-ups. Maybe he just happens to conquer the game-time adrenaline better than anyone else. Maybe his shooting touch is informed by another superpower, less discussed: His confidence is unshakeable.

“He’s Steph Curry. He’s the MVP for a reason,” Kerr said after Friday’s return to form, adding: “He doesn’t have the size and the strength to dominate a game physically, so he has to dominate with his skill, and that’s not an easy thing to do because your shot sometimes isn’t going to go in. But he has a lot of faith in himself, and he trusts his shot and he just kept firing, and tonight they went in.”

Curry had missed his first two shots, but he continued to attack. He strung the Cavs’ defense out, gashing it with drives. Eventually, the 3-pointers started falling. By the end, he’d even figured out a way to get open out of a double team.

With the Warriors up seven and a minute remaining, Channing Frye and Kyrie Irving blitzed Curry far from the basket. In an act of basketball jiu-jitsu, he used the Cavs’ force against them, shoveling the ball to Andre Iguodala and cutting behind a distracted double team. Iguodala passed it right back to Curry, who finished through traffic and fell on his back. Dagger delivered, timeout Cavs.

Curry had fallen hard, prompting Iguodala to trundle over. Last year’s Finals MVP picked his teammate up, slung an arm over Curry’s shoulder and walked him all the way to the bench. Though motivated internally, Curry hadn’t prevailed alone.

Perhaps even more will be needed from these two and other Warriors, depending on whether Draymond Green draws the league office’s ire for his tangle with LeBron James. No matter what happens, Curry will be self-assured, and his mutual trust with teammates will be strong.

These are the defending champs, after all. This is the reigning, back-to-back MVP, after all — in case anyone forgot. Curry remembers. And right now, the smell of ultimate victory begs him back to a wonderfully familiar place.