Home / Sports / SC on the Road: For James and Cavs, it’s closing time

SC on the Road: For James and Cavs, it’s closing time 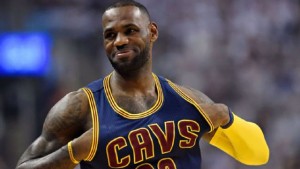 TORONTO — Now in the midst of his 11th postseason run and 36th career playoff series, LeBron James has racked up some impressive numbers and victory totals. Depending on where you draw lines, stats and streaks can be created in many different ways.

With that in mind, the situation James and his Cleveland Cavaliers face going into Game 6 of the Eastern Conference finals on Friday night in Toronto has historically been a comfortable one for him. Actually, it’s a situation in which he has been dominant throughout his career.

When going into a Game 6 with a 3-2 series lead, James’ teams in Cleveland and Miami are 8-1 during his career. The only loss was in 2006, his first playoff season, when he and the underdog Cavs missed a chance to close out and upset the Detroit Pistons before later losing Game 7.

Since then, when James gets in a 3-2 situation, it’s curtains. Two years ago with the Heat, James scored 25 points on only 12 shots to close out the Indiana Pacers in the conference finals. Last season, he ended the Bulls’ season in Chicago in a Game 6, though he wasn’t as dominant, shooting just 7-of-23.

The list goes on. James typically has avoided Game 7s when his teams are ahead — not that he believes it will matter in this game. He’s more focused on avoiding the type of early deficit that hurt the Cavs in Games 3 and 4, Cleveland’s only losses of this postseason.”I really don’t play off my career accomplishments,” James said. “If they happen, so be it. I’ve been blessed to be in a position where I can play the game that I love and be around some great guys, and my kids get an opportunity to see me do some special things.

“We’ve got to come out from the beginning, and it starts with the Big Three. It starts with myself, Kevin [Love] and [Kyrie Irving], and we’ve got to do a great job of pushing the tempo, getting these guys ready, and we’ll be much better. We’ll be more prepared. Our coaching staff gave us a great game plan in [Games] 3 and 4, and we didn’t execute it. But we’ll be more prepared.”

The Cavs are 4-0 over the past two seasons in road closeout games, which speaks to their depth of talent and the relative disparity of the competition in East. However, they are 0-4 this season in Toronto and no team has had more success against them than the Raptors.

Kyle Lowry had the best scoring game of his regular-season career when he put up 43 points against the Cavs in March. In Game 4, he fell a point short of equaling his career playoff high when he scored 35. DeMar DeRozan has cracked 30 points in both home games against the Cavs in this series. So James is more focused on that aspect.

But he’s also aware Friday night is his last chance to extend his personal streak of 24 playoff series with at least one road victory.

“My only mindset is to at this point get our guys mentally and physically prepared for a heck of a game,” James said. “And if we’re able to come home victorious, then the streak continues. If not, we prepare for Game 7. But that’s my mindset. My mindset has never been about, I guess, records or streaks or things of that nature.”