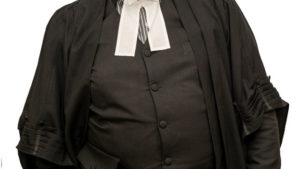 Ousted former Police Commissioner Wendel Robinson has declared that he intends to “resist robustly” any application for a stay in a recent High Court decision that ruled in his favour.

The High Court ruled last Thursday that the termination of Robinson from the police force was unlawful and null and void – as was the appointment of his successor and current top cop, Atlee Rodney.

The Police Service Commission has placed it on record that it will be appealing the matter and will be filing a stay on the judgment – a move that is being supported by the country’s Attorney General.

The ruling essential means that Robinson, who is a practicing attorney, is still technically the Commissioner of Police.

“He who comes to equity must come with clean hands. At the end of the day however, the court rules it rules, they have lost three times, and they have not honoured the decision of the High Court Judge. This speaks to whether or not, in truth and in fact, are we ready for the Caribbean Court of Justice when the authorities that be cannot respect the decision of a High Court Judge,” Robinson told OBSERVER media on Sunday.

He further contended that, “This is the third time the Police Service Commission has lost, they first lost the case in October of 2018 when Justice Godfrey Smith ruled in my favour, they have not honoured the decision of the Judge, neither have they asked for a stay.”

Robison went on to explain that at the second suspension hearing, the court was asked to rule that the matter was academic since he was no longer the active Commissioner of Police.

“They moved very swiftly to remove me fearing that I would win the second suspension, that matter is now before the Court of Appeal. That is two matters, and now they lost again, they want to go back to the Court of Appeal,” the lawyer said.

The PSC stated in a release on Friday that the ruling was concerning, and its lawyer, Dr David Dorsette, will be filing for a stay of judgment on the matter. The court is scheduled to hear the application for the stay on March 30th at 11 am.

He said that he is not necessarily bothered by the recent judgment and is confident the status quo will remain once the decision is appealed.

“I am satisfied that on appeal, this matter will be made right and the decision will be overturned when it comes up before the court of appeal,” Benjamin said.

Robinson’s legal troubles begun in 2018 when he was suspended amid allegation of misconduct. A team of investigators later served him with disciplinary charges.

Since then, he has been fighting his case through the court and sees this latest ruling as vindication.