Home / Regional / Not in Barbados! Government Minister Says No Gay Marriages Will Be Allowed

Not in Barbados! Government Minister Says No Gay Marriages Will Be Allowed 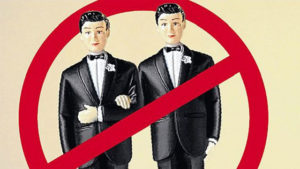 Minister of Social Care and Community Development Steve Blackett is sending a clear message to “external forces and internal forces” that same-sex marriage will not be tolerated in Barbados.

In an address at a meeting of the ruling Democratic Labour Party (DLP), he complained that lesbian, gay, bisexual, transgender and intersex (LGBTI) people were “badgering” Government to accept same-sex unions. But he said that while he was tolerant of the LGBTI community, the DLP administration would not cave to their demands.

“If you want to be same-sex, that’s your business…; nothing wrong with that at all. Barbados has always been tolerant to homosexuals among us. Any of us who grew up in Barbados know of what they used to call ‘she-she men’ in your communities…and they integrated into our communities. They are our relatives, our family or friends, our kith and kin, our hairdressers, our tailors…Same-sex relationships in most neighbourhoods are nothing new,” he added.

Blackett made reference to a recent newspaper article featuring two persons in a same-sex relationship, and asked: “Is this the precursor to the new norm after the general elections, aided and abetted by constant and persistent lobby by the LGBTI lobby, from external forces and internal forces?”

He did not name either the external or internal forces, but it was a clear reference to a report last week by the powerful human rights organization, Human Rights Watch, which is closely linked to the United Nations.

In the report. entitled ‘I Have to Leave to be me: Discriminatory Laws Against LGBT People in the Eastern Caribbean’, Human Rights Watch suggested the time had come for Barbados to recognize same-sex marriage and provide the sort of atmosphere in which the LGBT community can live freely and without fear of persecution or victimization.

The New York based organisation also said Barbados must “repeal Section 9, Chapter 154 of the Sexual Offences Act of 1992, which criminalizes consensual same-sex conduct”.

The DLP has also stated repeatedly that morality would be part of this year’s election campaign, in what is seen as a veiled attempt to link the Barbados Labour Party to same-sex unions.

Blackett told party faithful at the meeting that the Human Rights Watch recommendations were nothing new, because LGBTI people had at all times featured prominently in, and were vital parts of, this island’s communities.

“What is new, though, is an attempt to transpose and to transplant a foreign culture into Barbados called same-sex marriage. Now that is what I have a problem with. We must also watch this creeping attempt to offend and insult our moral sensitivities here in Barbados,” he warned.