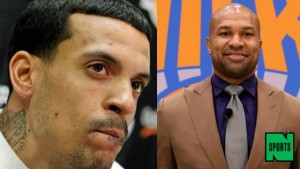 UPDATE:
Derek Fisher addressed the New York Post story about Matt Barnes attacking him a short time ago. He didn’t confirm the report, but he also didn’t deny it.

Matt Barnes is still out here talking about how he was romantically involved with Rihanna. But apparently, that doesn’t mean that his ex-wife Gloria Govan is allowed to date other men. And according to an explosive report published by the New York Post today, Barnes is especially upset with the idea of Govan dating Knicks head coach Derek Fisher.

The Post is reporting that Barnes and Fisher were involved in an altercation at Govan’s home in Los Angeles on Saturday night after Barnes discovered that Fisher was there. A source told the Post that Barnes drove 95 miles from Santa Barbara, Calif.—where the Grizzlies are holding training camp—to Los Angeles to “beat the shit” out of Fisher, who has reportedly been dating Govan for “a few months.” It doesn’t sound like Barnes was successful, but it does sound like he tried to go after Fisher.

“Matt came after Derek but he only had a few scratches,” the source told the Post. “Derek’s not going to press charges. He’s going to let it go.”

A representative for the Knicks refused to comment on the report, but it’s worth noting that Fisher was not at the Knicks’ practice on Monday due to “personal reasons”: