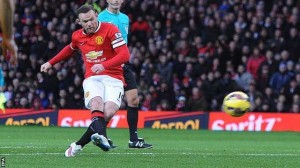 Clinical Manchester United increased the pressure on Liverpool manager Brendan Rodgers as they capitalised on some poor defending to run out comfortable victors at Old Trafford.

Rodgers – who dropped struggling goalkeeper Simon Mignolet for Brad Jones – can point to a succession of brilliant saves from United’s David De Gea and a controversial second goal from Juan Mata as significant factors in defeat.

This, however, will do little to ease the growing concerns for Rodgers and Liverpool, with the memory of their thrilling 3-0 win here in March – in a sequence that almost took them to their first title in 24 years – seeming an age away.

United captain Wayne Rooney gave them an early lead and Liverpool had every right to feel aggrieved when Mata headed in from a clearly offside position to take the game away from them just before half-time.

Even before United took the lead, De Gea made an important save from Raheem Sterling, denying the England youngster on four occasions as well as producing three vital contributions to stop Liverpool substitute Mario Balotelli getting his first Premier League goal for the club.