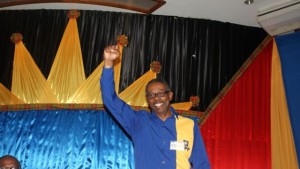 Lovell unanimously emerged the winner of Antigua & Barbuda’s main opposition party in what has been described as a “divisive” race for the leadership by members of the UPP and political pundits.

The new leader copped 291 votes from the 304 delegates eligible to vote. His lone contender, Eleston “Namba” Adams, received 13 votes. There was one spoilt ballot.

Sources at the closed-door event said cheers erupted for Lovell after the formal announcement of his victory was made. Reports also indicated that Adams received loud cheers and applause from the delegates for every vote he received, a gesture he accepted in good faith.

Lovell told OBSERVER media that he will remain committed to the party’s moving ahead as “one united party”.

He said now the leadership race has ended the party will be able to “take the fight to the Antigua & Barbuda Labour Party.”