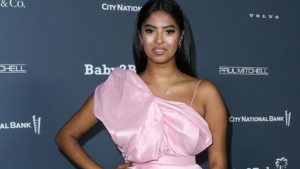 Kobe Bryant’s daughter, Natalia Bryant, just received a restraining order against an alleged stalker whom she says has been “harassing” her and might be carrying a gun.

According to legal documents, obtained by The Blast, Natalia claims the man, who we are choosing not to name has, for several years now, “attempted to communicate with her in order to express his unrequited love for her.” Obviously, she also claims to have no relationship with this person and does not wish to have one in the future.

In the filing, Natalia goes into the scary details saying her alleged stalker has been trying to contact her via social media since 2020, while she was still a minor. Recently, the man’s advances have obviously been extremely unwelcome even though she does not interact with the man. Now, Natalia claims the harassment has escalated from attempted contact on social media to contact “in-person at her school and where she lives.”

At this point, Natalia claims her family and law enforcement are also “afraid and concerned for her safety.”

In July of 2021, Kobe’s daughter got one disturbing message that read, “Thankful For Him Birthing You, Hopefully, We Can Birth Him… ‘Kobe’.” Also, on Christmas Day last year, the man sent a message stating, “Don’t Get Nobody Hurt Playing Around Ms. Bryant.”

Shockingly, the man traveled from Sun Valley, CA to attempt to meet Natalia on the USC campus in Southern California. The alleged stalker showed up at Natalia’s sorority house, where she attends college, forcing her to report the incident. Both the Los Angeles Police Department and the USC Department of Public Safety are currently investigating the situation, and the USC incident report from November 2nd, 2022, states, “safety is at issue and is believed she may [be] at risk of being targeted by unwanted and unsolicited attention that may place her in a safety risk.” The school issued a “no trespass” notice to the man, and his conduct was reported to LAPD’s Threat Management Unit.

Unfortunately, it gets worse. Around the time the alleged stalker attempted to make contact with Natalia at USC, he posted another message on social media showing images of a “Draco” and a “Mini Draco” style assault rifle. Alongside the photos, he wrote the comment “next”, which she says “seems to imply that these would be his next purchase. I am informed and believe that the Draco and Mini Draco are both pistol-style AK47 firearms.”

Natalia is informed that the alleged stalker has a criminal record and has been arrested and/or convicted at least four times for misdemeanors, one of those incidents involving a gun.

The good news is that a judge agreed with the seriousness of the situation, and ordered the man to stay at least 100 yards away from Natalia. Now, the famous offspring will need a judge to order a permanent order for long-term protection from him.

As you know, the Bryant family has been through a lot in the past few years with the former ‘Los Angeles Lakers’ star dying in a helicopter crash alongside his other daughter, Gianna.