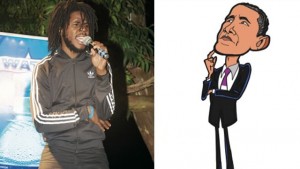 In an interview with Billboard.com, the singer said the media is to blame for misrepresenting his Instagram post, made during Obama’s visit to Jamaica in April.

“The post was more about Marcus Garvey as a leader of the black movement. The media has a way though how to fix things to their own benefit. They use little points from what you say and take it and put it as headline. So they might take the most insignificant aspect of a whole reasoning and use that as the headline,” he said.

The Instagram rant was triggered by what Chronixx considers the US government’s failure to clear National Hero Marcus Garvey of mail fraud in that country.

Garvey was deported to Jamaica in 1927 after serving four years in a Federal prison for mail fraud. Some historians and scholars argue that his imprisonment was politically and racially motivated.

Chronixx was roundly criticised for describing Obama as a ‘waste man’, street slang for a person lacking ambition.