Home / Sports / Houston, we have a problem: Kevin McHale fired by Rockets after 4-7 start 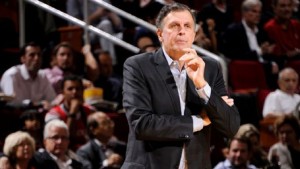 HOUSTON — The Houston Rockets fired Kevin McHale on Wednesday with the team off to a lackluster 4-7 start just a year after advancing to the Western Conference finals.

Assistant J. B. Bickerstaff will take over as interim head coach in the shake-up announced by general manager Daryl Morey hours before Houston hosted Portland.

McHale was in his fifth season with Houston and is coming off a 56-26 season where the Rockets reached the West finals for the first time since 1997 before falling to eventual champion Golden State. The 57-year-old Hall of Fame player went 193-130 with the Rockets.

The Rockets opened the season with three straight losses, won four in a row and are now in a four-game skid. It’s a puzzling performance by a team that has almost everyone back on the roster and added dynamic point guard Ty Lawson. But the team has not really gelled, causing McHale to complain about the effort of the team and its sloppy play. He was particularly vocal about those issues after a blowout loss to Boston in which Houston blew an early 15-point lead.

“At times, I wouldn’t say full effort all the time, no,” he said. “Things aren’t going our way and we hang our head. We haven’t put together really good basketball all year long.”

McHale was hired on June 1, 2011, to take over for Rick Adelman, who had spent four years with the team.

The Rockets finally got over the hump last season, getting the second seed in the West by posting their best record since 1997 and reaching the conference finals for the first time since that Charles Barkley-led team went 57-25.

McHale spent his entire playing career in Boston after he was the third overall pick in the 1980 draft. The power forward helped the Celtics win it all in 1981, `84 and `86. The two-time NBA Sixth Man of the Year was named one of the NBA’s 50 greatest players in 1996 and was inducted into the Hall in 1999.

After his playing career, he spent several years as an executive with the Timberwolves before coaching the team for parts of the 2004-05 and 2008-09 seasons after coaches were fired. But his first real shot at coaching came when he took over the Rockets.

During Houston’s playoff run last season the Rockets raved about how McHale was a player’s coach. Star James Harden said he was comfortable with him from the moment they met.

“I felt like I was talking to an actual player,” Harden said in May. “Obviously he’s won championships so he knows what he’s talking about. So my ears are just locked in and focused in on what he’s saying.”

This season, McHale’s gruff, old-school approach seemed to be falling short and the Rockets were forced to make the abrupt change.