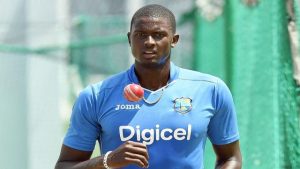 PORT OF SPAIN, Trinidad (CMC) – Jason Holder is expected to retain his position as captain of the West Indies Test team for the upcoming series against Pakistan in the United Arab Emirates, according to media reports in Trinidad.

However, Holder has been reprimanded and given notice that he could be stripped of his position if he continues to underperform, a report in the Trinidad Guardian has suggested.

There was widespread speculation that the Barbadian all-rounder would lose his job in the days leading up to last weekend’s meeting of the West Indies Cricket Board (WICB) in Dominica.

However the Guardian, without citing sources, has reported that Holder was given “a serious dressing down” by chairman of selectors Courtney Browne.

The Guardian has reported that a note was passed to the board of directors during the weekend meeting, stating that the selection chairman had a “frank talk” with Holder, concerning his form in the longer format of the game and whether he warrants selection outside of being captain.

The Guardian has reported that the selection panel is not yet convinced that Holder should be removed as leader of the Test team and that he runs the risk of being removed as captain if he fails to produce during the Pakistan series.

However, he is yet to lead West Indies in a winning series, losing two nil to Sri Lanka, two-nil to Australia and by a similar margin to India.

Holder, 24, has captained the team for nine matches, winning none, losing six, with three ending in draws.

West Indies start their tour with a warm-up game against Emirates Cricket Board XI at the ICC Academy next Tuesday before meeting Pakistan in the opening T20 International three days later at the Dubai International Stadium.