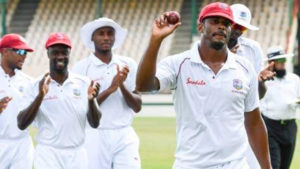 Gros Islet, Saint Lucia (AFP) — Kraigg Brathwaite’s defiance and more inclement weather ensured a draw on the final day of the second Test between the West Indies and Sri Lanka at the Daren Sammy Stadium in St Lucia yesterday.

On a day when their captain, Dinesh Chandimal — who has been charged by umpires Aleem Dar and Ian Gould with ball tampering on the second day of the match, is likely to know his fate — the tourists stayed focused on events on the field in reducing the home side to 64 for four in early afternoon after setting the West Indies an unlikely victory target of 296.

However Brathwaite’s obdurate, unbeaten 59, with support from Shai Hope and captain Jason Holder ensured that the showers which came in the final session, coupled with deteriorating light, eliminated the Sri Lankans’ chances of levelling the series.

Shannon Gabriel took the last two wickets of the Sri Lankan second innings within minutes of the start of play to finish with the outstanding innings analysis of eight for 62 and match figures of 13 for 121, the third-best by a West Indian in Tests and the best-ever by a Caribbean bowler in home conditions.

When he wrapped up the Sri Lankan innings for 342 by bowling Akila Dananjaya, Gabriel also reached the landmark of 100 Test wickets.

Kasun Rajitha, the debutant fast-medium bowler who claimed three wickets in the first innings, rocked the West Indies with the wickets of Devon Smith and Kieran Powell within the space of three deliveries at the start of the final innings of the match.

Senior seamer Suranga Lakmal accounted for Roston Chase and Hope, but time ran out on the striving Sri Lankans and they were left frustrated by the weather, which once again closed in during the final session and leaves them trailing in the series ahead of the final Test in Barbados, beginning on Saturday.

It will be a historic occasion at Kensington Oval as the first day/night Test to be played in the Caribbean and will also be starting on the 90th anniversary of the West Indies’ first day of Test cricket against England at Lord’s in London on June 23, 1928.

Yet it is quite possible that Chandimal will only be a spectator to all that history if he is found guilty of ball tampering.

While he has challenged the charge, match referee Javagal Srinath will be required to adjudicate in a hearing immediately upon the conclusion of the match to make a final determination on the Sri Lankan’s skipper’s fate.

Evidence to be presented against Chandimal will include video footage from the television broadcasters which appear to show him taking sweets from his pocket and placing them in his mouth and subsequently applying saliva onto the ball in a manner that the umpires determined to be in violation of the code of conduct regulations in relation to “changing the condition of the ball”.

There were concerns that the Test match was in jeopardy on the third morning on Saturday when Chandimal refused to lead his team onto the field for the continuation of the West Indies first innings after he was informed of the charge by the umpires and the application of a five-run penalty.

It required clearance from Sri Lanka Cricket (SLC) authorities in Colombo to clear the team to continue the match under protest. SLC also issued a statement saying they were satisfied their players were not involved in any wrongdoing, based on the information provided to them by the officials on location.

Should he be found guilty though, Chandimal faces a one-Test suspension which will rule him out of the last match of the series.

While the International Cricket Council’s (ICC) cricket committee has recommended an increase to the penalty for ball tampering to suspension for four Tests or eight One-Day Internationals, that has yet to be ratified by the ICC.