Home / Sports / Cavs are finally whole, and in the nick of time for Finals rematch

Cavs are finally whole, and in the nick of time for Finals rematch 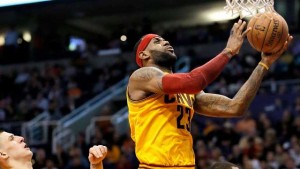 CLEVELAND — Before the Cleveland Cavaliers took the court on Wednesday and beat the New York Knicks 91-84 for their sixth win in a row, LeBron James canvassed his teammates, who were about to run alongside him in front of a horde of screaming fans at Quicken Loans Arena.

James saw Kevin Love, his game fully in gear after his left shoulder healed. And he saw Kyrie Irving and Iman Shumpert, the pair that started referring to each other as The Hardy Boyz while injuries kept them out of the lineup because of the tag team effect they planned to bring in their return. He saw Mo Williams, back from a temporary absence stemming from a sprained right thumb. And he saw the rest of the Cavs’ core, all 13 of Cleveland’s top rotation players, ready and raring to go.

“It was a great feeling today,” James said afterward. “We was in the tunnel before we ran out and for the first time [fully healthy]. I cannot remember — and I can remember everything — I cannot remember the last time I looked in the huddle and we had everyone in uniform. That was a pretty good feeling.”

That feeling is one of rebirth for a Cavs season that has been solid so far, at 19-7, but is now set up to be downright stellar. Not only did Wednesday’s win add to Cleveland’s ridiculous record when its Big Three are all playing — 35-3 in its last 38 games with the healthy trio, dating to last season — but it also gave a glimpse of the versatile, multifaceted unit it can be.

“It’s big for us because it’s a starting point,” James Jones said. “We’ve assembled a very good team. A lot of depth. A lot of talent. But we haven’t been whole. So we’ve just been playing ball. But now that we’re whole, it’s finally here, as we say. Now we have to find our true identity.”

The potential for that identity is intriguing. The Cavs have what it takes to become an elite offensive group, shown by their assisting on their first nine baskets on Wednesday. Then they finished the game showing their defensive muscle, holding the Knicks to 1-for-7 from the field with two turnovers on New York’s final nine possessions.

“We’ve been waiting for this,” said Shumpert, who locked down Arron Afflalo late in the game. “Everybody has been working their ass off, trying to make sure they’re healthy. We know what we’re capable of. We’re capable of throwing out a lot of different lineups. We can go small, we can go big, we can go quick. We got a lot that we can throw at teams. There’s no breaks. Everybody that comes in is looking to produce; everybody is going to produce, and we’re just looking to win.”

The timing of the Cavs’ metamorphosis couldn’t be better with an NBA Finals rematch against the Golden State Warriors right around the corner on Christmas Day. While James played down the significance of the game, pointing out that it’s just “one of 82” and adding that “it’s not like the season ends if we lose or if we win,” the date against the Warriors was a major motivator in the rehab for both Irving’s fractured left kneecap and Shumpert’s surgically repaired right wrist, a team source told ESPN.com.

The Cavs are far from a finished product. Wednesday’s contest was only Irving’s second game back. He shot just 1-for-7 in the 20 minutes he was limited to, and after the game, he returned to the court to take some extra shots as he works to regain his All-Star form.

It was also coach David Blatt’s first game having so many options when he glanced down his bench. He played nine players for 14 minutes or more, while also working in spot appearances for Jones and Richard Jefferson to expand his rotation to 11. Anderson Varejao and Jared Cunningham, who showed flashes early in the season when the Cavs were riddled with injuries, were the only two healthy scratches.

“If you look at the stat sheet, I played more guys and a lot more minutes than what we have been able to up until this point. I don’t know if it’s going to look like that every game, but we did try to mix it around,” Blatt said. “We mixed it up pretty good minutes-wise in order to give guys a feel for the floor and get players involved. I recognize it’s going to be tough as we go down here because we have a lot of good players.

“You look to the bench and you’re like, ‘Wow, I can put in a good number of guys.’ Before it was like, ‘Who do we have left to put in there?’ It’s a good feeling because our depth is significant. More than that, just to see these guys healthy again and playing, that feels good.”

The thing is, they already have found a bit of a stride. They held the Knicks to 39 percent shooting after holding their previous four opponents to an even stingier 37.9 percent. They already have been impressive, no doubt. “[They’re] not fearful of any moment,” Knicks coach Derek Fisher said.

And the biggest moment of the season thus far — the rematch with the Warriors on Friday — arrives when the Cavs have all their horses in the stable. But the players understand it’s not the be-all and end-all moment. It’s simply another step in their progression.

“We replayed [the Finals]. I’ve seen it plenty of times,” Jones said. “I know ‘Bron’s watched it. Kyrie has watched it. Every guy has watched it. But we know that’s so long ago, that’s not even who we are today. We may have the same players, but we’re not the same team. And we can look at that for motivation, but realistically, the only thing we need to do is look across from each other in practice and realize that we have real solid competition pushing each other and chasing each other to earn minutes. That’s enough motivation to bring out the best in anyone.”