Home / National / CARPHA: Risk Of Ebola Outbreak In The Caribbean Is Low

CARPHA: Risk Of Ebola Outbreak In The Caribbean Is Low 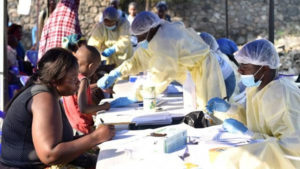 On July 17, The World Health Organization issued a statement declaring the Ebola outbreak in the Democratic Republic of the Congo a Public Health Emergency of international concern, however leading health officials in the Caribbean say there’s no need for panic at this time.

News agencies in the DRC reported that as of July 28 July, there were 2577 confirmed cases, including 1696 deaths.

Speaking with the Caricom Secretariat communication unit, newly appointed Executive Director of Caribbean Public Health Agency (CARPHA), Dr. Cheryl Joy St. John said the chances of an Ebola outbreak in the Caribbean is low at this stage. She said it is however cause for an assessment of the region’s health systems.

“The reason why CARPHA issued a statement about Ebola is to put it into context of how low the risk is so to use the opportunity assess and evaluate the systems, not just within the ministries of health but systems with other partners such as port health; you cannot have a porous border, so I’m thinking of a situation where I’m telling people that yes they issued a statement saying that Ebola is a public health emergency of international concern, that no it is not a situation where there will be an imminent case of Ebola coming to the Caribbean.

“So it’s just a matter of assessing systems to ensure that we have the right support to give Caribbean member states. So we’re working on a review of the systems.”

The CARPHA Head said while the agency has been in dialogue with Tourism stakeholders throughout the region, they are cautioning against unnecessary travel restrictions in response to the Ebola threat.

“One of our key partners in this whole issue is going to be the tourism industry so we will also be communicating with the industry because what we do not want is that countries put measures in place that are not necessary This whole issue of stopping persons from traveling, stopping persons from coming into the Caribbean countries, that is not necessary. This is why we’re working with the countries, the tourism industry so there are not inappropriate measures put in place, no unnecessary cessation of travel or movement of goods…we are not at that stage.”