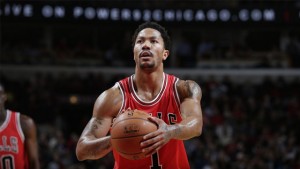 CHICAGO — The news that Derrick Rose will have knee surgery again hit the Chicago Bulls and their fans hard and left them in a familiar spot — trying to get by without their star point guard.

The torn meniscus in his right knee was announced Tuesday night, another tough twist for a franchise, a star, his sponsors and a fanbase that thought the Bulls were entering another golden era just a few years ago, with the Chicago product leading the renaissance.

Instead, he’s having surgery on his right knee for the second straight year — on the heels of a season he missed entirely following a torn left ACL.

“It’s so unfair,” Bulls coach Tom Thibodeau said. “The guy’s been through so much. Any time you have surgery, it’s tough. This will hopefully be much, much shorter than the other one. But the big thing is our concern for him first as a person.”

Rose’s rise from growing up in a tough Chicago neighborhood to stardom with his hometown team is well-documented. He has a maximum contract with the Bulls and a huge marketing deal with Adidas.

But in some ways, this era is feeling like a big tease for the Bulls and their fans.

Instead of celebrating a championship for the first time since the Michael Jordan-Scottie Pippen era, they have suffered through close calls and long waits while Rose recovers.

It wasn’t what the Bulls envisioned after taking him with the first pick in the 2008 draft. He went from Rookie of the Year to All-Star to MVP in his first three seasons, becoming the youngest player to win that award in 2011 while leading Chicago to 62 wins and the Eastern Conference finals.

But the feel-good story took a drastic turn the following season when Rose crumpled to the court with a torn anterior cruciate ligament in his left knee in the playoff opener. The top-seeded Bulls bowed out in the first round against the Philadelphia 76ers.

Rose sat out the 2012-13 season, and his long-awaited comeback last season ended at 10 games.

“I’m still shocked,” Kirk Hinrich said. “I didn’t have any idea he had an injury like that (Tuesday) at practice. I just feel for him. You can’t imagine what he’s gone through these last three years. Just when it seems like he was hitting his stride and playing great and it kind of felt like he had put it behind him, for this to happen is just devastating.”

Thibodeau said Wednesday it’s not clear when the injury happened or when team physician Dr. Brian Cole will perform the surgery. The coach wasn’t sure how long Rose will be out, either.

If he misses the remainder of the year, it would be his third season-ending knee surgery.

“Heartbreaking, in a way, because of how much he’s been through for the last couple of years,” Pau Gasol said. “Difficult to deal with. We feel for him.”

Thibodeau said the Bulls knew another tear was possible. The question is how Rose proceeds from here.

Dr. Alexis Colvin, an orthopedic surgeon specializing in sports medicine at the Icahn School of Medicine at New York’s Mount Sinai Hospital, said he could have the torn cartilage reattached or removed.

She said a reattachment — the procedure he had last year — is the better long-term option. But he would miss the rest of the season. Removing the torn cartilage would keep him out at least six weeks, meaning a return would be possible. The problem is it increases the risk of arthritis.

Colvin, who has not examined Rose, is not ruling out the possibility of him playing at a high level again.

“The good thing, I guess, is it’s not like he’s (torn) two ACLs in the same knee,” Colvin said. “It’s meniscus surgery, which typically the recovery is not as bad as some of the other things can be. I don’t think I would necessarily write him off for now.”

Rose’s return combined with the addition of Gasol as part of an offseason makeover had them thinking big again. The news came when the Bulls appeared to be picking up steam and putting their recent struggles behind them.

They had won six of seven and were leading Cleveland by a half game in the Central division at 36-21 before hosting Charlotte on Wednesday.

Rose, who played in just 10 games last year after sitting out the 2012-13 season following surgery on his left knee, is averaging 18.4 points and 5.0 assists. He had played in 19 straight games and 30 of 31, easing concerns about his knee.

Rose appeared to be rounding into form, averaging 22.6 points over his final 14 games before the All-Star break. But he struggled in three games after that.

He had eight points on 1-for-13 shooting while playing almost 33 minutes in Monday night’s 87-71 victory over Milwaukee. He averaged 10.7 points on 23.5 percent shooting in Chicago’s first three games after the break.

Now, he’s back on the shelf again.

“The last procedure he had on his meniscus, we knew this was a possibility,” Thibodeau said. “Unfortunately, it didn’t take. Now, they have to go back in and take care of it.”

The injury only magnifies the doubts about whether Rose can lead a championship team, something that seemed like a distinct possibility a few years ago.