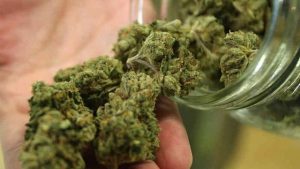 The Barbados government has defended the decision to transition from sugar cane to medicinal marijuana indicating that the sugar industry was no longer generating the type of foreign currency expected.

“We must transition to an industry that not only gives a new deal to all Barbadians, but at the same time gives us a chance to leverage our strength internationally and to be able to participate in the global industry that is destined to become the leading industry of the world,” said Agriculture and Food Security Minister, Indar Weir.

A government statement issued late on Tuesday said Weir outlined the position as he addressed an online Dialogue with the Barbados Diaspora that was chaired by the island’s Ambassador to the United States and the Organization of American States, Noel Lynch.

It said that the event placed the spotlight on the Barbados Medicinal Cannabis Licensing Authority (BMCLA) and the opportunities available for all to participate in the medicinal cannabis industry here.

The statement said that the meeting last Thursday heard that the decision to explore this avenue hinged on four fundamental pillars, including that Barbados intended to be a hub/centre of excellence in research and development (R&D) in medicinal cannabis and is anticipating that this would provide the country with “a unique opportunity to present a unique cultivar”, giving the best strain known in the world, to position it as “one of the best” in the industry in R&D.

The transition is also aimed at ensuring that Barbados becomes a centre for training with Weir indicating that this would allow Barbadians to transition into the industry not only as participants but as trainees and trainers through the assistance of the University of the West Indies.

“The third pillar for us is to produce new opportunities in tourism, where people can now come to Barbados, not just for a short stay, but long-stay visitors who are here for rehabilitation, health and wellness reasons.

“At the same time, where they can come, transfer the cost of coming to Barbados to their insurance company and come to Barbados for recuperation, rehabilitation and treatment in medicinal cannabis, utilising the health and wellness spas that we will create in Barbados,” Weir said.

The Agriculture and Food Security Minister said that the fourth rationale is regarded as the “most fundamental” noting this was because it aimed to give Barbadians a chance for economic enfranchisement, in an industry presenting a new view for all and giving them a chance to function the way we used to when tourism was booming, and sugar was ‘King’.

He, however, noted that while Barbadians considered it “a good move”, there were still concerns. Pointing out that his Ministry was always seeking to address these in much the same way as it was interacting with members of the diaspora, he acknowledged that one such concern was the belief that some without finance would be unable to participate in the industry.

In dismissing such a notion, Weir said in the legislation and regulations the Ministry was “at pains to explain that at no point in time would Barbadians be left behind”.

He said the government was currently working through the Ministry and the BMCLA to make sure this promise of participation by all Barbadians was kept. He also revealed that synergy with the Farmers’ Empowerment and Enfranchisement Drive (FEED) would be created.

The meeting was told that despite the emergence of the coronavirus (COVID-19) pandemic, Barbados has been successful in the implementation of the plans for the medicinal cannabis industry.

Weir said that the BMCLA continued with its plans for the medicinal cannabis industry, passing regulations, and by January of this year was able to fully launch a new industry giving a new deal to all Barbadians.

Describing the progress to date as a “tremendous job”, Weir said so far there were 84 applicants who had expressed interest in participating in the industry.

“I am happy to note that of the 84 applicants, the majority are Barbadians…or Barbadians with international connections.”

“We have equally said that any Barbadian that is participating is allowed 100 per cent participation. So, the fact that you are a Barbadian and you want to join the industry you do not have to create space for anyone to participate with you; you can do that all alone.

“But if you are an international investor, then you have to create space to give 30 per cent ownership to Barbadians and to my mind that is a significant move as we try to make sure that this industry is an industry for Barbadians and not like we did in the past, with sugar, where we exported everything in bulk and the wealth was concentrated in a very small area.

“Today, I am pleased to report to you that of the 84 applications received so far, we are at the point where we can soon deliver an approval for three of those applications and continue to work with the others,” Weir added.