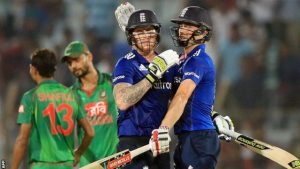 Ben Stokes made 47 not out and Chris Woakes sealed the win with 13 balls to spare with a glorious straight six.

Opener Sam Billings impressed with 62 and Ben Duckett hit four fours and a six in his 63.

It was an impressive chase from England, whose top three had a mere 14 appearances between them, compared to the 250 between Bangladesh’s top three.

The tourists now turn their attention to Test cricket, with back-to-back two-day warm-up matches this week before the first Test begins on 20 October.

A new opening partnership of James Vince and Billings quickly put England ahead of the rate in their chase under the floodlights.

Vince (32) played fluently once again but it was the kind of promising, yet unsubstantial, innings that cost him his Test place.

Billings, however, scored all around the wicket with some cleanly struck shots and the tourists were 10 runs ahead of Bangladesh at the same point when the Kent batsman picked out deep square-leg in the 25th over.

He also used his feet to excellent effect to play straight down the ground and reached 60 for the second time in his maiden international series.

There was also judicious use of the improvisational, but a delicate leg flick was superbly snaffled by a diving Mushfiqur with 99 still needed.

The powerhouse middle order of Stokes and skipper Jos Buttler looked to be guiding England to a comfortable victory with a stand of 48 in seven overs that prompted parts of the passionate crowd to head for the exits, but the captain was one of two wickets to fall in 12 balls.

Woakes was dropped at slip with 21 still needed, but in between the errant strokes he played some masterful shots – none better than the majestic lofted drive that settled the contest.

Having been dismissed for a mere 204 at Dhaka in the previous match, England were in danger of a first ODI series defeat by Bangladesh.

The Tigers, who played their first international in March 1986, lost their first 12 one-day matches against England but had won four of their past six against them going into the decider.

They were also seeking a sixth successive home one-day series victory and began in confident fashion after being invited to bat first, Tamim Iqbal (45) becoming the first Bangladesh batsman to 5,000 ODI runs and sharing 80 in 19 overs with Imrul Kayes (46).

While England’s 20 overs of spin yielded 5-85, the decision to employ four seamers was hardly vindicated by 1-185 in 30 overs.

Rashid claimed four wickets in an innings for the fourth time and finished as the leading wicket-taker for the series with 10, though it often proved to be his less impressive deliveries – rather than the fantastical Shane Warne-style fizzing leg breaks turning square – that brought him success.

After the drama of Dhaka, when Buttler was reprimanded for the vehemence of his reaction to taunts from the Bangladesh fielders and two home players were fined, there were no scenes of a similar nature.

A potentially explosive moment when bowler Mashrafe Mortaza collided with Billings pursuing a run was settled amicably after a brief exchange of views.

‘We stood up as a young side’ – what they said

England captain Jos Buttler: “In tough conditions, physically and mentally, we’ve stood up as a young side, and to come away with a series win is just reward for that.

“Ben Stokes showed great leadership to take the onus on and be the man there at the end.”

England coach Trevor Bayliss on Sky Sports: “Bangladesh are putting together a good young team and are difficult to beat on home turf.

“We played some good cricket. Our two most inexperienced batters top-scored and batted very, very well. For a young team to come away with a win is fantastic.”

Bangladesh captain Mashrafe Mortaza: “The toss was the real factor. England’s bowlers got turn. Our spinners had a lot of dew so couldn’t turn the ball.

“Until the end we fought it out. But England were too good. They played really well. All credit to England.”

A thrilling end to what has been an absorbing one-day series. It has been keenly contested, with plenty of fiery moments but some great skill on show from both teams.

But Ben Stokes batted with great maturity, keeping the scoreboard ticking with the odd lusty blow thrown in, and his innings came when the game could have gone either way.

Adil Rashid would have bowled far better in picking up four wickets, and as a bowling unit it was probably their poorest outing, but overall an excellent win.