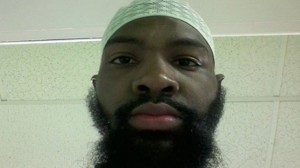 WASHINGTON, United States (AFP) – The mother of an American worker suspected of beheading one of several colleagues he had tried to convert to Islam has broken her silence, apologised in a video posted online.

Alton Nolen, 30, is due to be charged Monday with first-degree murder, as well as assault and battery with a deadly weapon. He may also face federal charges.

It was after being fired from his job at the Vaughan Foods in an Oklahoma City suburb that Nolen went on a frenzied knife rampage Thursday, severing the head of a colleague and wounding another before being shot by his former boss.

“My heart is just so heavy right now,” his mother Joyce Nolen said in the video posted Saturday on Facebook. “That’s not my son.”

The incident came in the wake of a series of beheadings of Western captives by militant fighters in the Middle East and Algeria, but US officials have not confirmed any link to the Oklahoma case. Nolen had recently converted to Islam.

“His family, our hearts bleed right now because what they saying Alton has done,” Nolen’s mother said in the short video statement, sitting next to her daughter Megan.

“I want to apologise to both families — because this is not Alton.”

She said she was hoping that justice will prevail and “the whole story will come out.”

In a separate Facebook entry, Megan Nolen said her brother “has been a great influence to me and has always been a loving and caring person.”

“He has never been a violent person and has never done any physical harm to anyone. Only God knows why what happened took place,” she added.

“I am praying for the families as well as for my brother.”

On Facebook, Nolen went by the moniker Jah’Keem Yisrael. He posted photographs of the World Trade Center towers going up in smoke during the September 11, 2001 attacks and of graves.

“SHALOM ALHAKEIUM O YE MUSLIMS AND NON-MUSLIMS ON THE DAY OF JUDGMENT THE ONES WHO DIED IN FAITH (SERVANTS OF ALLAH SWT) WILL RISE FROM THE DEAD TO BE JUDGED WITH EVERYBODY ON EARTH WHOS STILL LIVING…THE ONES WHO DIED IN SIN WILL REMAIN IN THEIR GRAVES CAUSE THEIR ALREADY IN HELL!!!” he wrote on September 17 in a posting that got five “likes”.

In another post in May disparaging Americans who eat pork, women who don’t cover their hair and gays getting married, he warned that “SHARIA LAW IS COMING!!!!!!”

His account shows he has 1,470 “friends,” many of them women wearing the Muslim veil.

The Islamic Society of Greater Oklahoma City has stressed that “this unwarranted act does not represent Islam in any shape or form.”

“We condemn, and are 100% against, the heartless & unnecessary act committed by the suspect. We stand for justice.”

Local media quoted the group’s Saad Mohammed as saying other Muslims who attended the same mosque as Nolen considered him “a little odd” and “a little weird”.

But Mohammed also noted that Nolen’s behavior did not raise any red flags, and that he had attended services during which sermons were delivered condemning beheadings such as those committed by Islamic State militants based in Iraq and Syria.