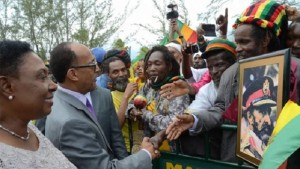 Prince Ermias Sahle-Selassie, the grandson of the man at the heart of Jamaica’s Rastafarian movement, is on a nine-day trip to the Caribbean island – half a decade after the State visit of his late grandfather, Emperor of Ethiopia Haile Selassie.

The Prince, who is accompanied by his wife, Princess Saba Kebede, will stay in Jamaica for the rest of the month in commemoration of the 50th anniversary of his grandfather’s visit.

Speaking at the Haile Selassie High School which he said would receive a J$600,000 (US$4,906) donation, he said he felt blessed to witness the fruit borne by the educational institution, for which ground was broken by Emperor Selassie when he visited Jamaica in 1996.

He commented on the academic achievements of students who have graduated from the institution, and its successes in the sporting arena, as he recalled his grandfather’s desire to see his people educated.

“His Majesty saw education as an advancement. We weren’t his only children; there are many Ethiopians who he sent abroad to study, (and) they all started out from humble backgrounds. So his vision and foresight has extended to Jamaica,” he said.

Principal of the school, Lorenzo Ellis, who said the funds would be used in a building programme, disclosed that members of the Prince’s delegation had advised him they would be contacting others in Ethiopia to contribute to the school.

At a press briefing held at the airport to welcome him and his wife the previous day, Minister of Culture, Gender, Entertainment and Sport, Olivia Grange noted that the Rastafari culture has made an indelible impact on life in Jamaica and across the world.

She said the Rastafarian movement, which started in Jamaica in the 1930s, represents one of the most articulate voices of resistant expression, and she pledged that the government would continue to do its part to ensure that Jamaicans “never lose sight of Rastafari as an important sociocultural movement in our history.”